It was difficult for us to believe, but India became one of our favorite places to eat in the world. My readers know that I’m not easily impressed…I reserve my 4-star and 5-star ratings for hotels, restaurants, and tours that truly go above and beyond my (admittedly) high expectations. The K3 International Restaurant in the JW Marriott New Delhi was a culinary experience made for a king (or queen)! During our two-night stay, we indulged in breakfast and a dinner. Both were out of this world. The variety of food options and the exquisite quality was beyond what we could have imagined for a buffet.  We couldn’t possibly try everything in a single sitting…even when our game plan was to limit ourselves to a single bite of as many selections as possible. 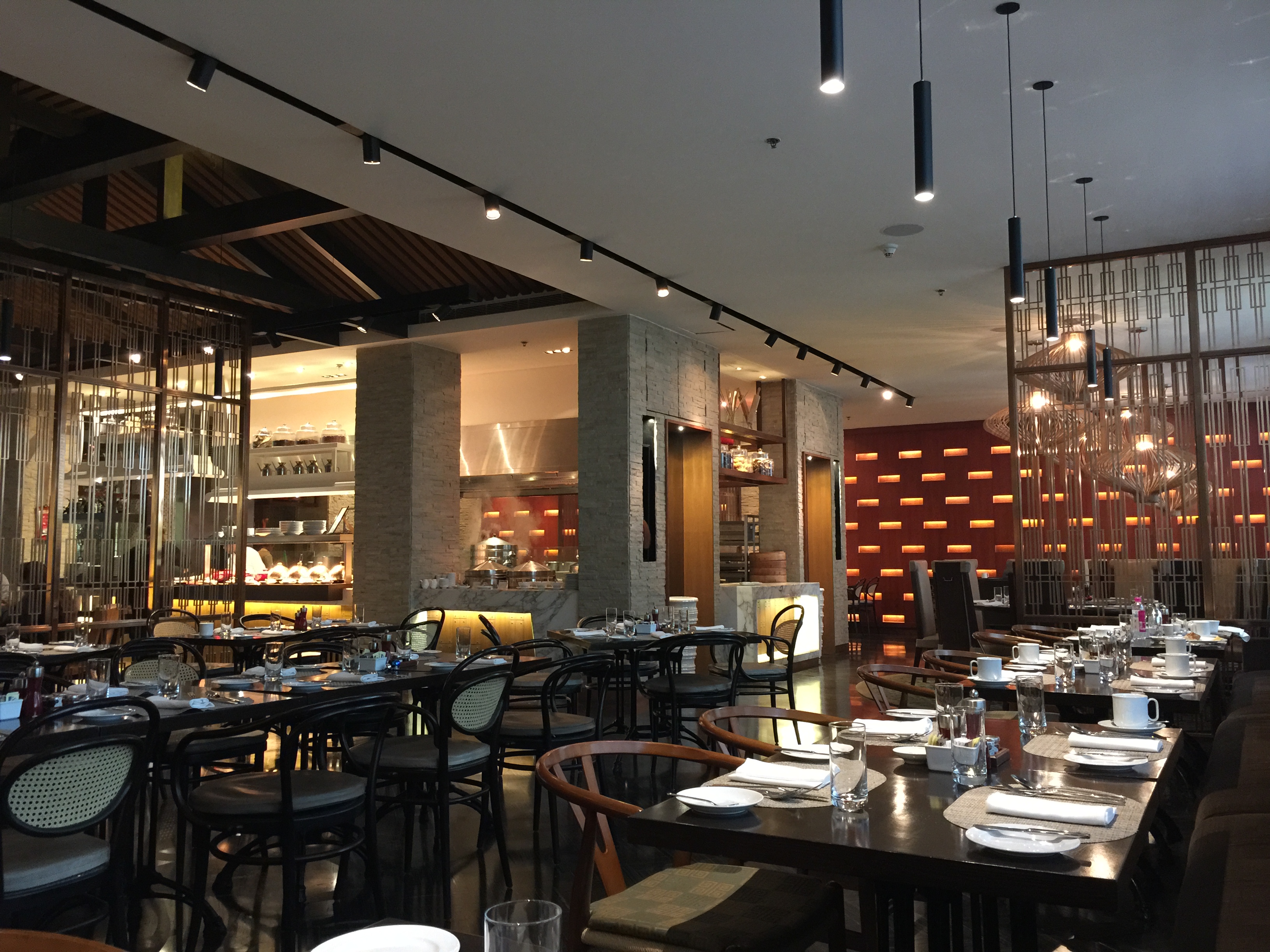 The restaurant takes its name from the three major regions that inspire its cuisine: Tuscany, Canton, and India.

My favorite station at K3 was the Asian(Canton) section–so many of my favorites plus house specialities. The sweet and sour shrimp was nothing like what we might have expected to find had we spotted that name on a menu in the US.  It had delicately sauteed, perfectly cooked shrimp in a light sauce with a hint of sweetness.  Absolute nirvana.  They also had a wide variety of freshly steamed dim sum dumplings–different styles and flavors. 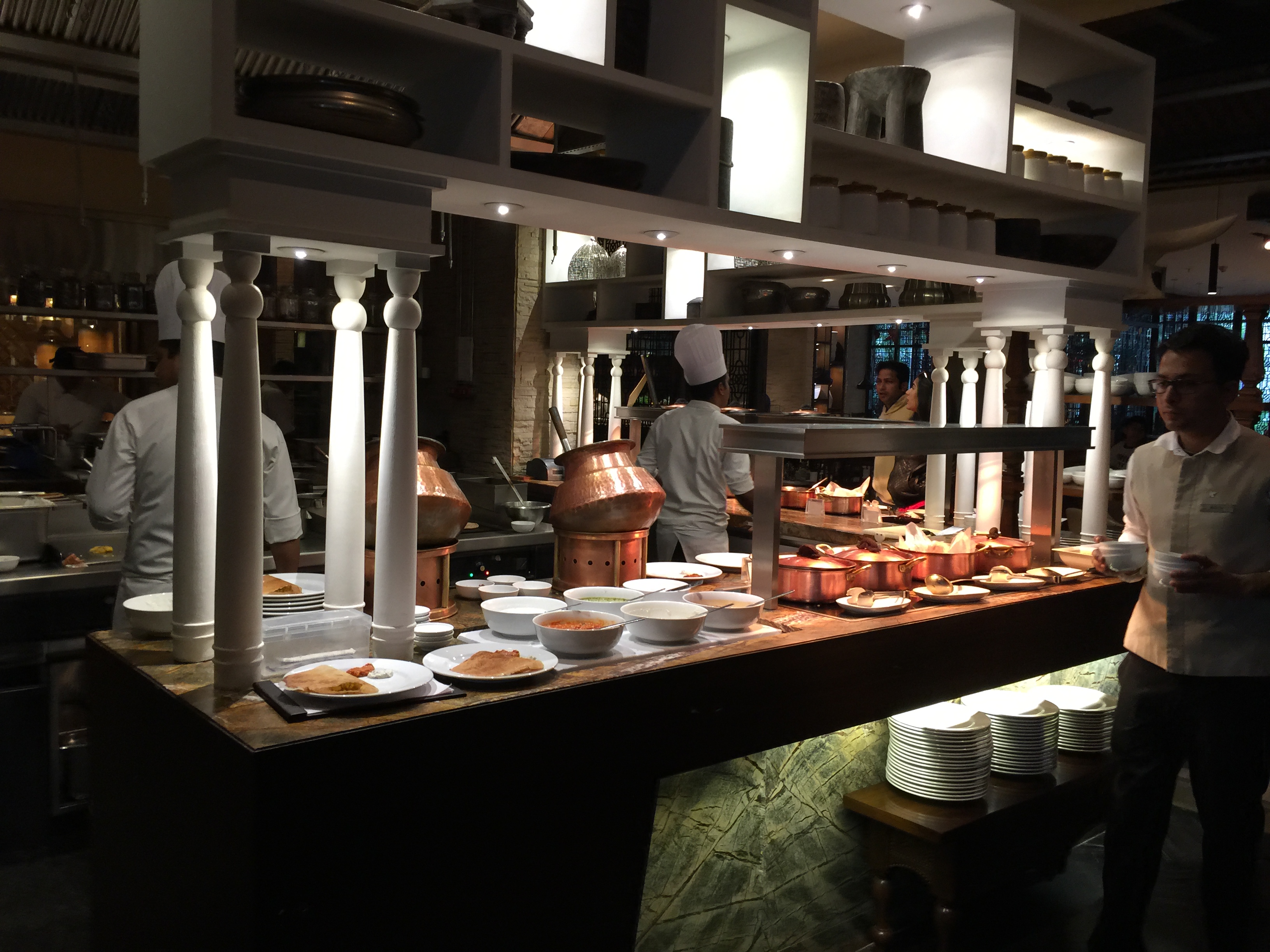 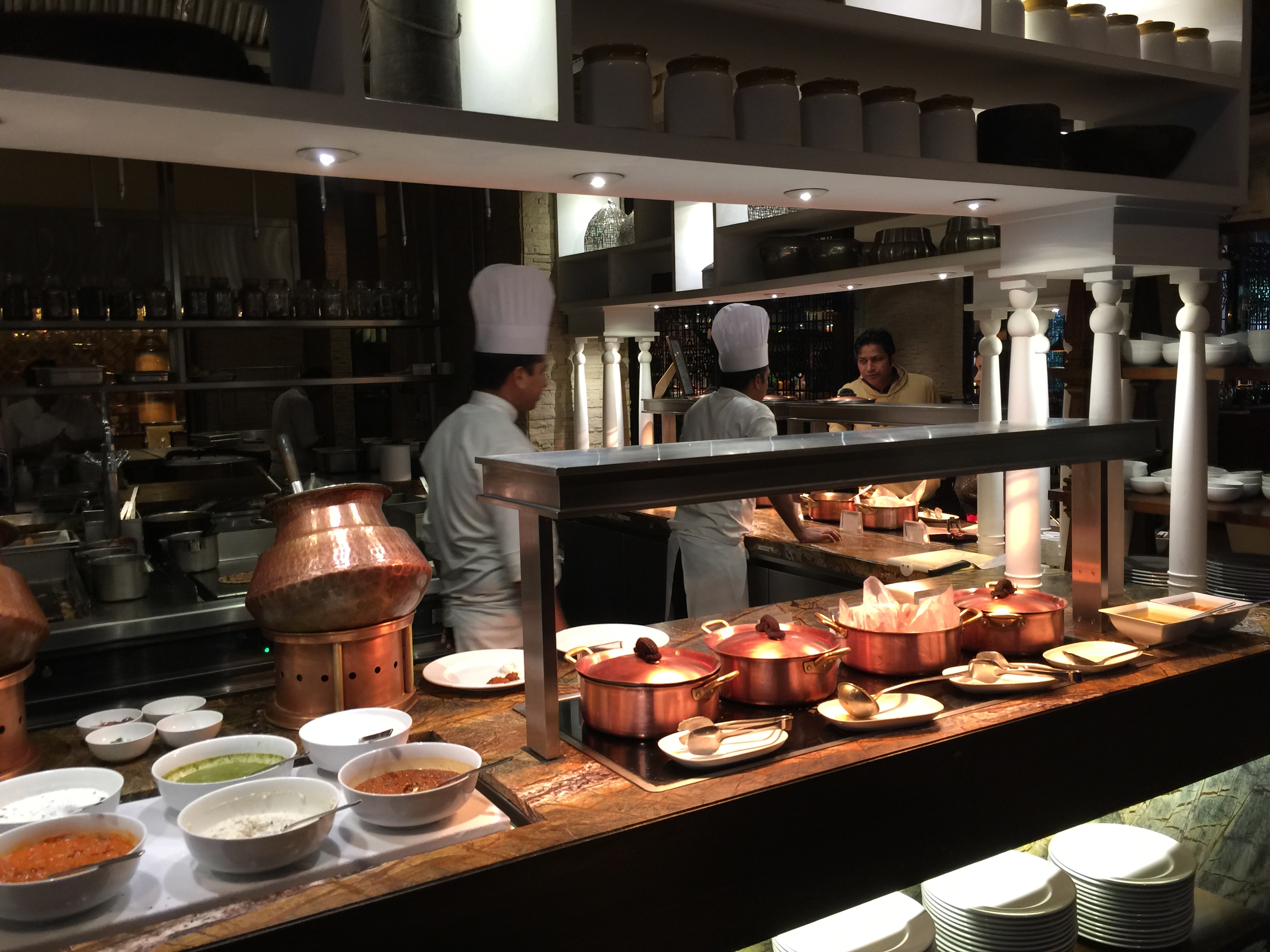 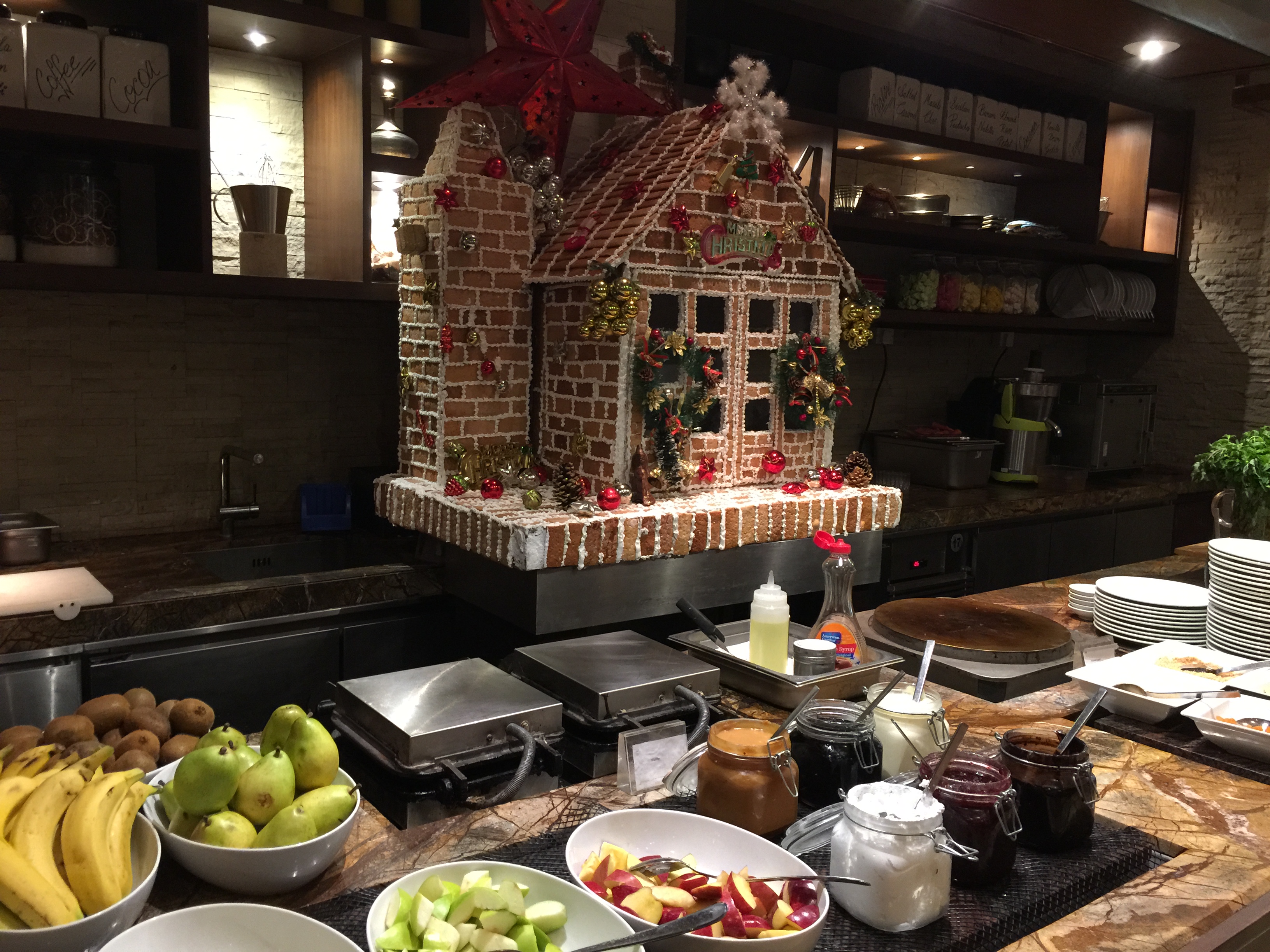 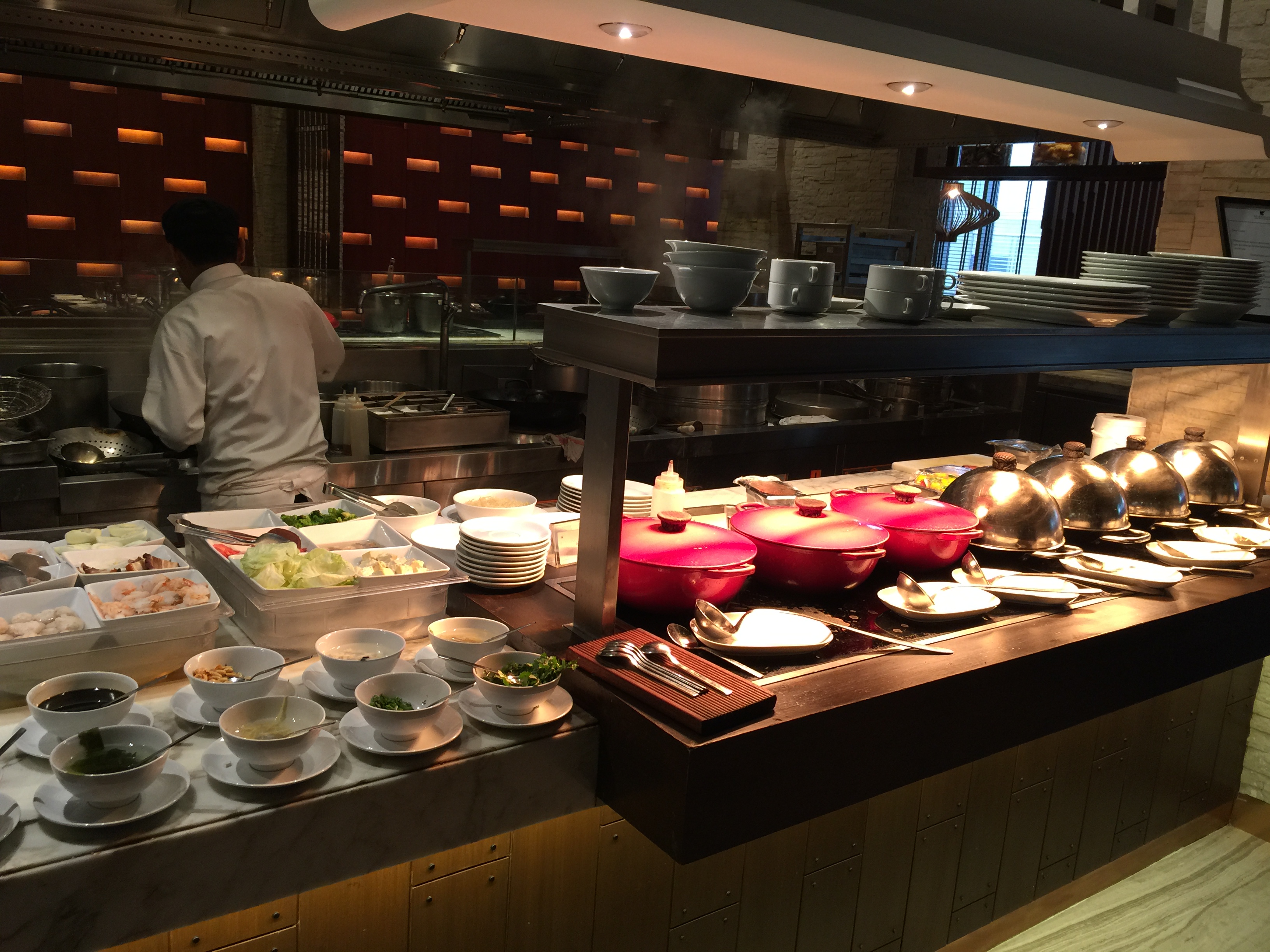 Daniel could not resist the Indian food sections. Yes, sections is plural because K3 had Indian cuisine from multiple regions of India. India is a vast country and the cuisine and culture varies substantially throughout…Similar to the US and many other places in the world, food from the North is quite distinct from that of the South. We thoroughly enjoyed the delicious learning experience that K3 provided.  We left stuffed full of naan and knowledge! 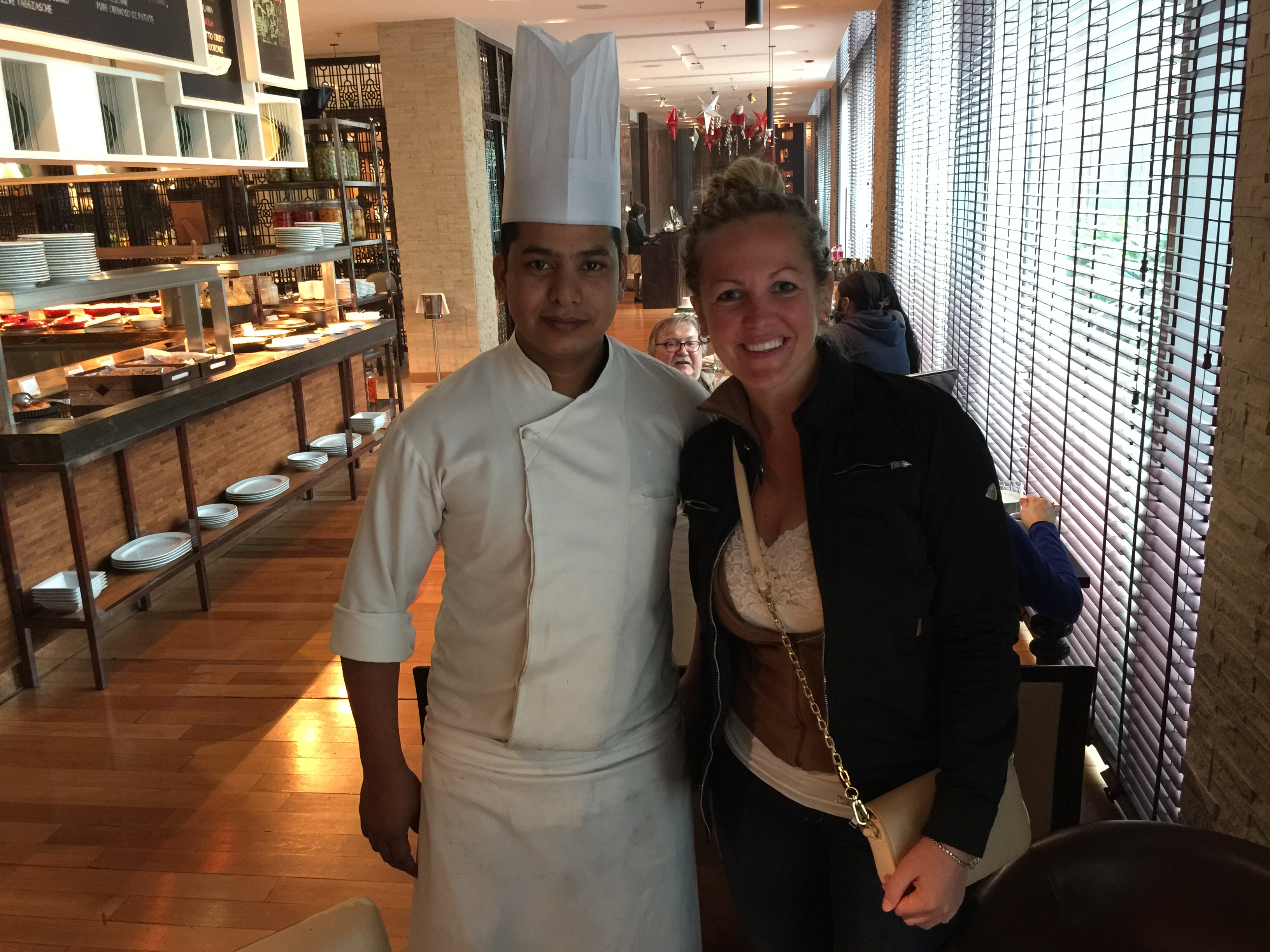 Daniel complemented one of the executive chefs preparing some of the Indian food and quickly befriended him.  They spent some time discussing the food and the differences in cuisine we had noticed throughout our time in India.  The chef came to our table with the restaurant manager and told us about the some of the regional specialities that had been left off the menu that night. 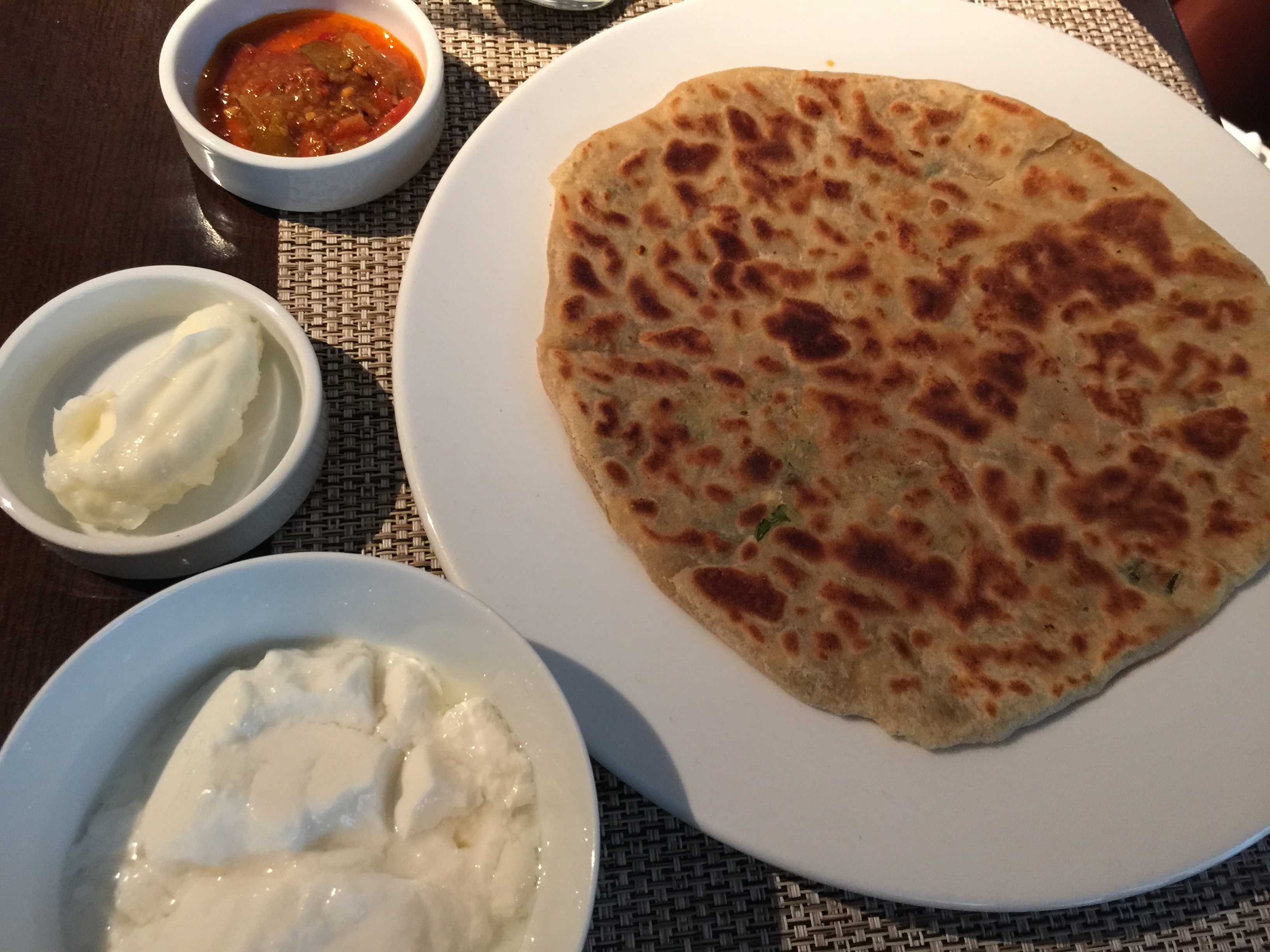 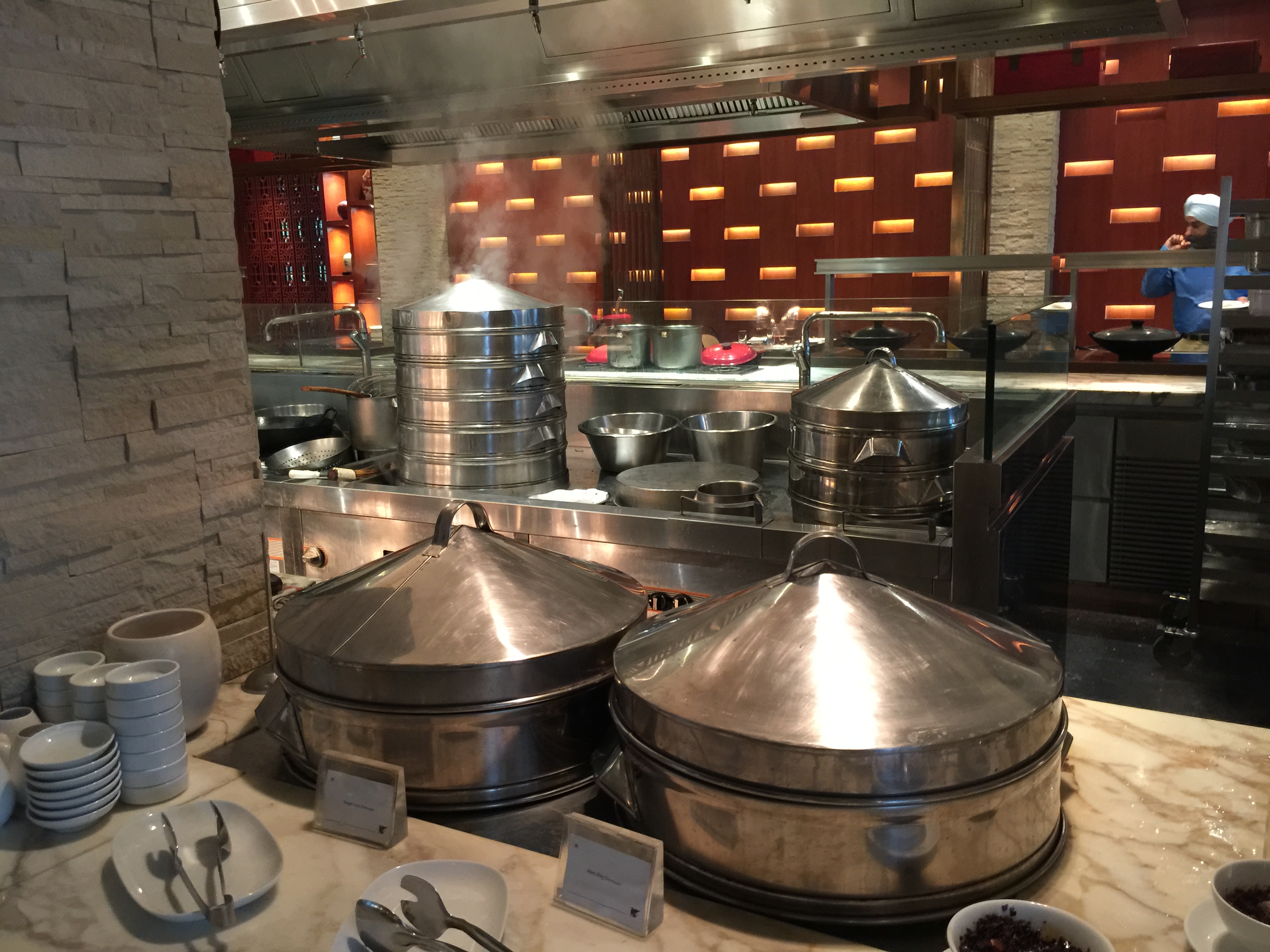 He really wanted us to try his favorite dish…a traditional Muslim goat curry from his hometown in Northeast India.  After he told us it would take at least six hours to prepare, we told him not to go to all that trouble, but he insisted on serving it to us for breakfast the next morning.  We were pretty adventurous eaters during our time in India (considering we had heard plenty of horror stories about people getting sick from eating the wrong foods), but we had shied away from goat thus far in India–mostly because the goats we saw wandering the streets didn’t look healthy. But this was a gourmet chef at a 5-star restaurant at the JW Marriott–it had to be good. We had nothing to worry about because it was delicious! The sauce was amazing…like nothing we had ever tasted…and we had to request more fresh naan to dip into the sauce. 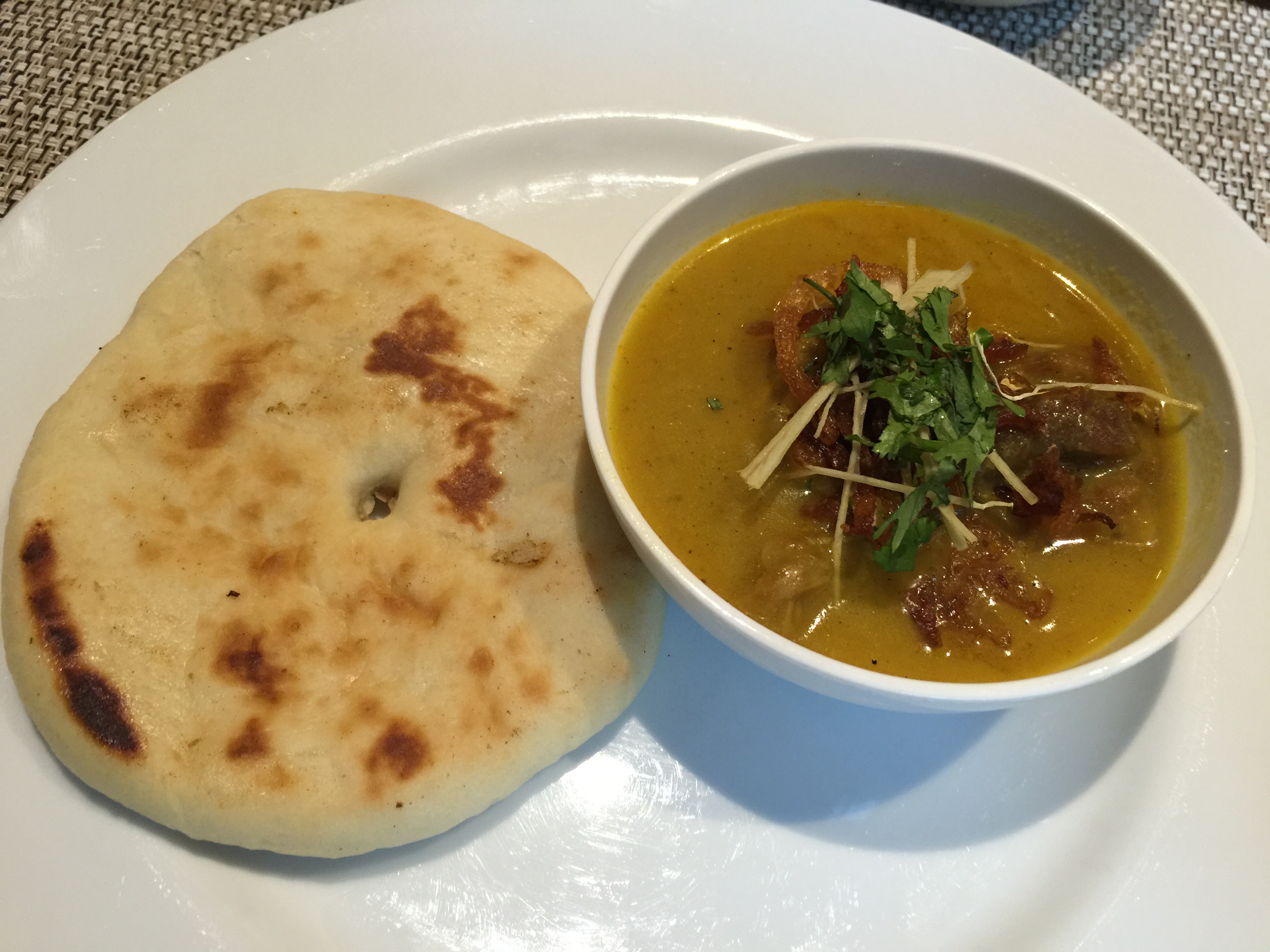 The sweets area looked delicious, but we were stuffed to full capacity. We tried a few bites, but dinner prevented us from enjoying a complete dessert tasting. We left with no regrets because dinner was completely worth it!

Breakfast at K3 was included in our room rate, so we did not want to miss out, despite the fact that we were still full from last night’s feast.  We really enjoyed the traditional Indian breakfast…Some of the best we had tried. We skipped over the omelettes, bagels, and other typical American breakfast foods.  However, we couldn’t resist when the manager brought us mouthwatering, homemade banana pancakes for dessert…It was a real treat! 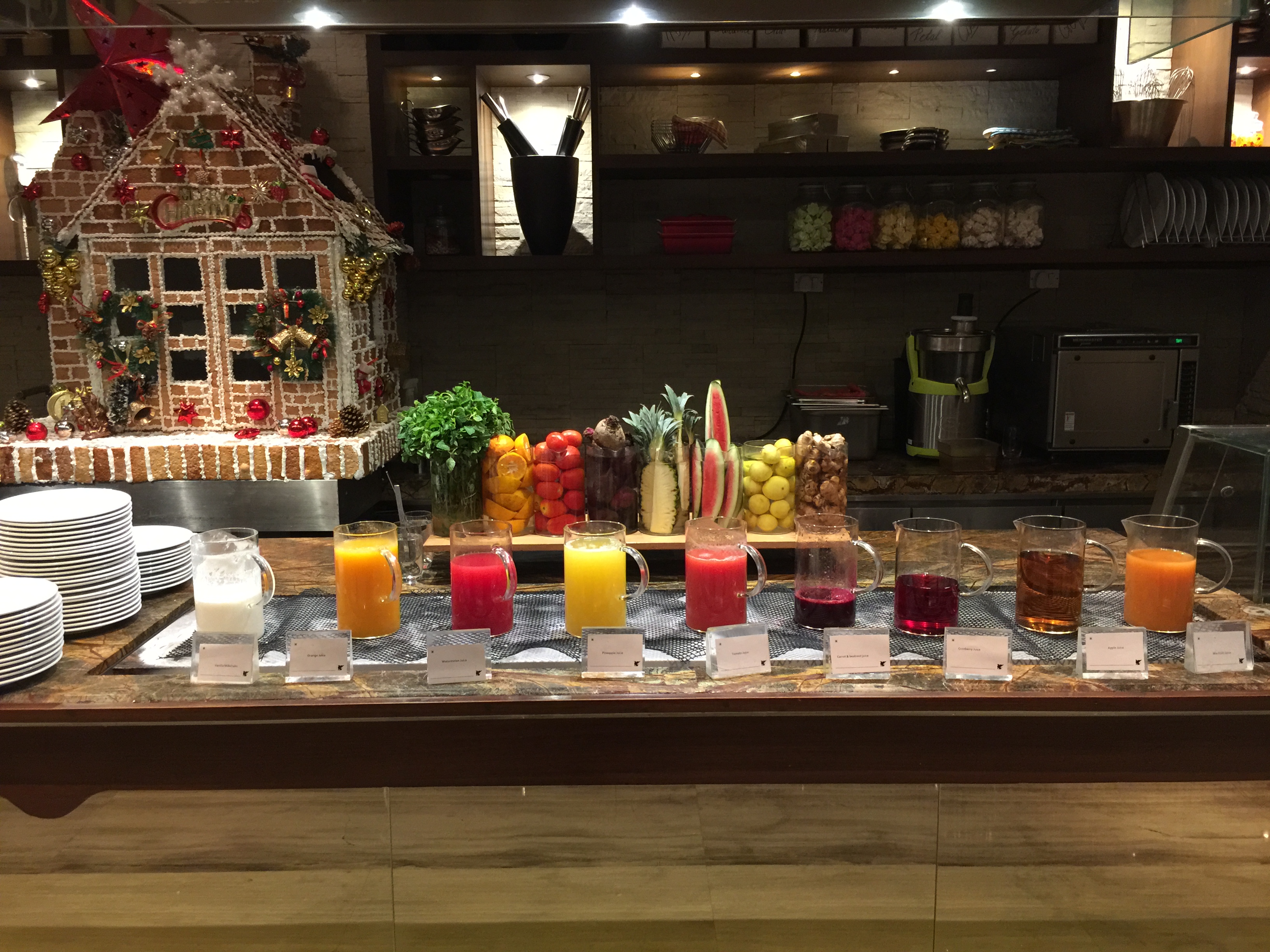 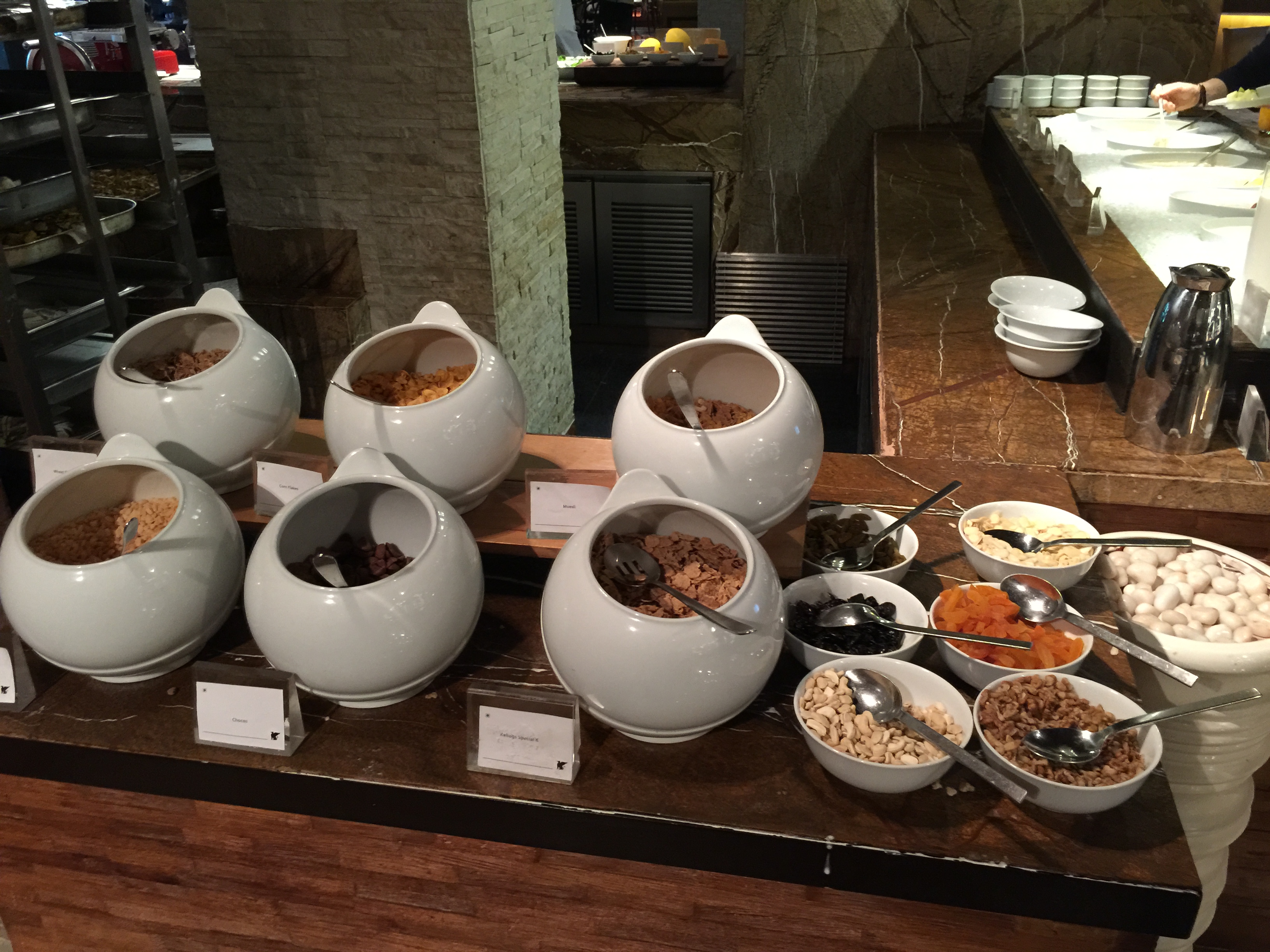 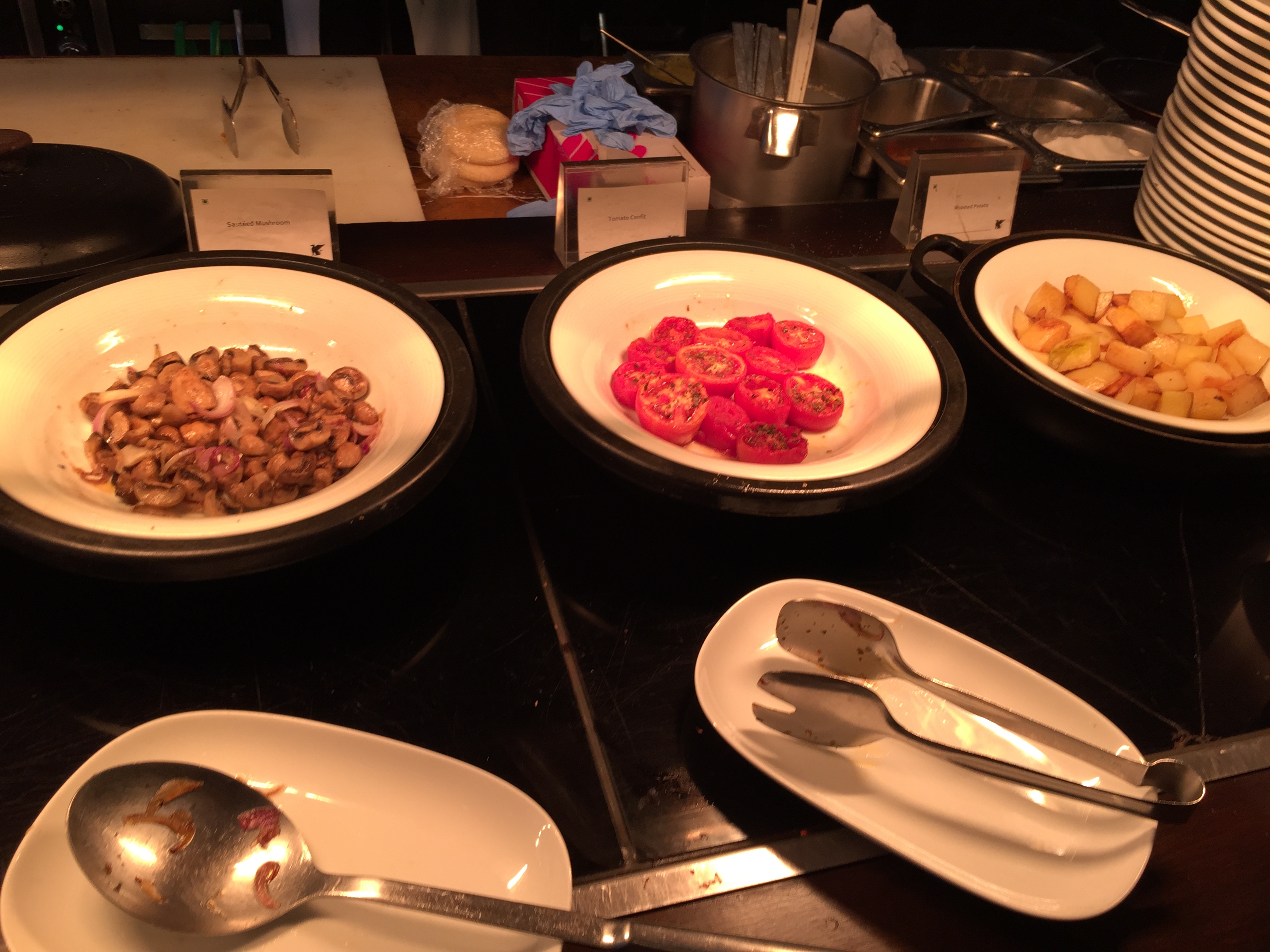 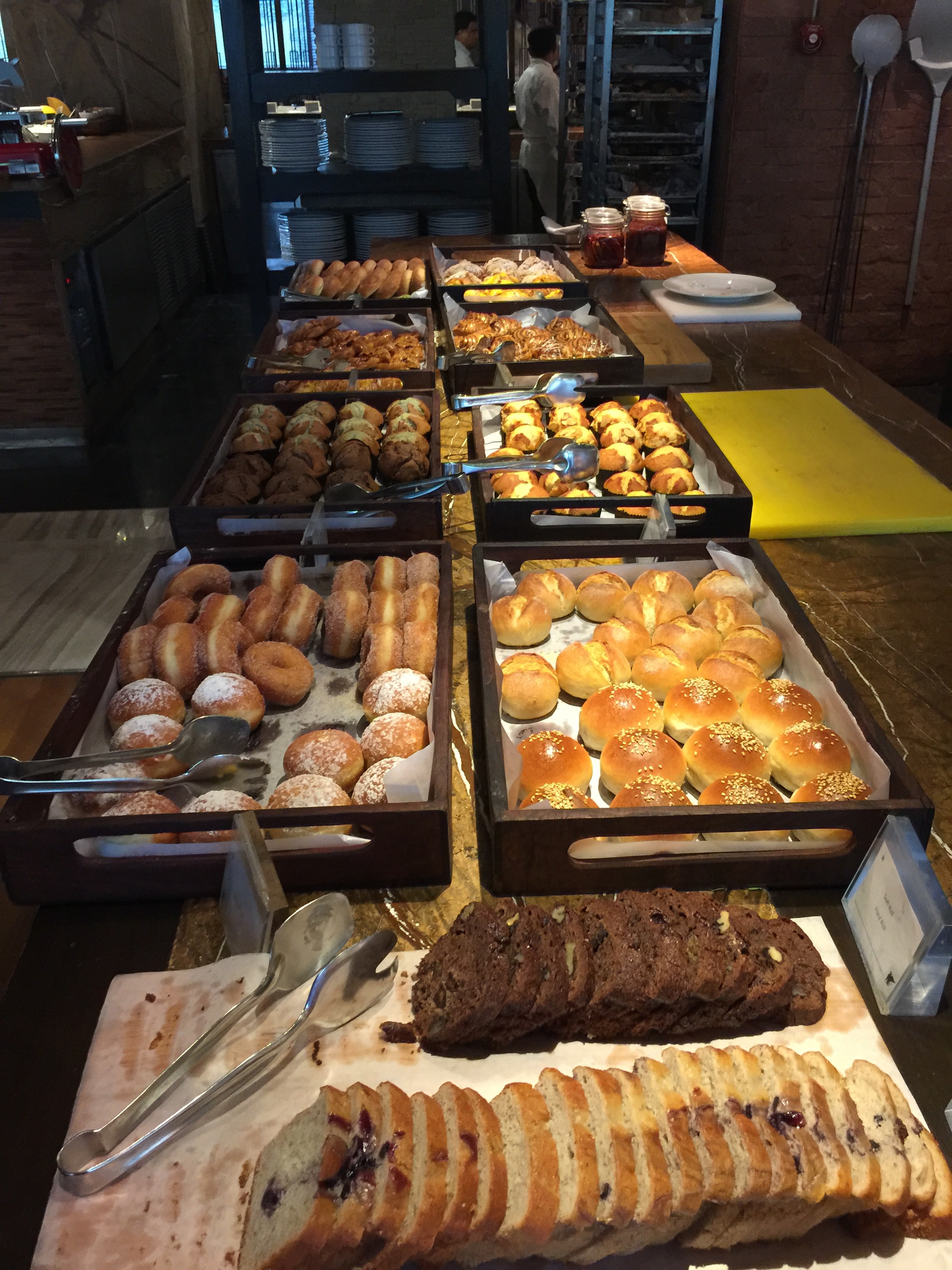 The coffee was top notch. Sometimes we found that it was difficult to find good American style coffee in Asia. But K3’s coffee got a thumbs up!

All in all, K3 exceeded expectations in every category.  Not to be missed!