On our third day in the big A, we checked out of the Grand Hotel Amrath. I had mixed feelings about moving to the Radisson Blu because I really loved the historic vibe of the Grand Hotel Amrath with its unique mixture of contemporary and modern comfort and an authentic and historical ambience. It fed into my European historical fiction fantasy dreams! Plus, it had a Nespresso machine in the room. 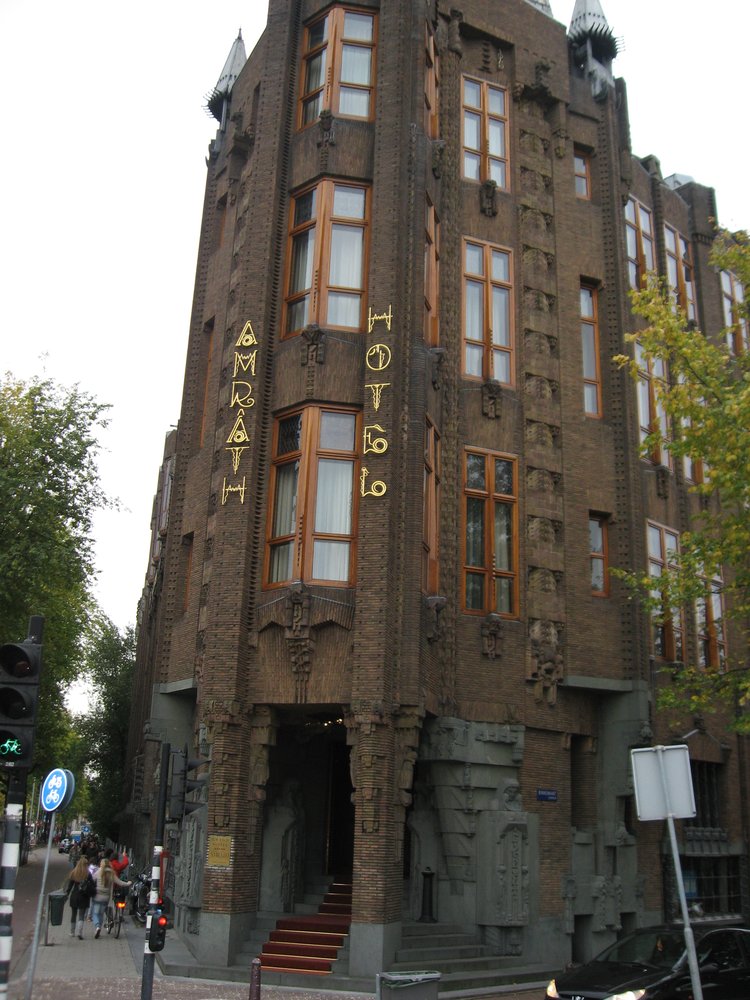 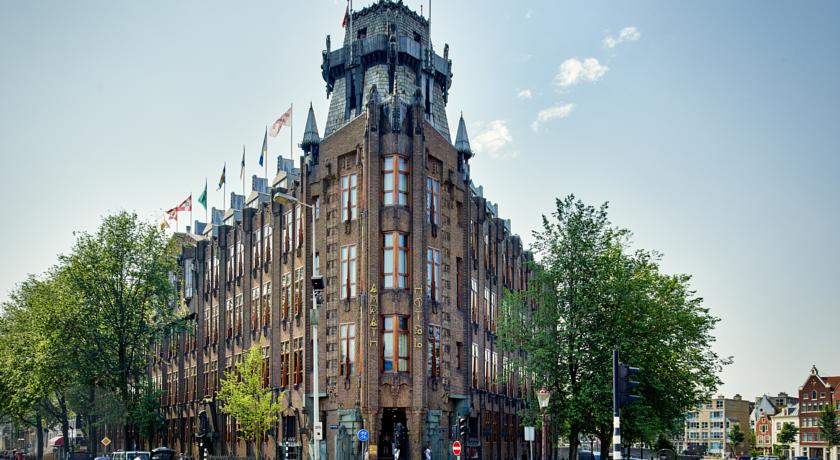 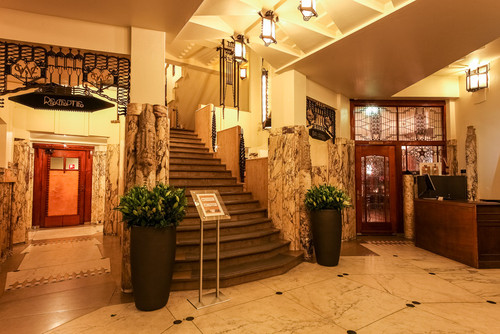 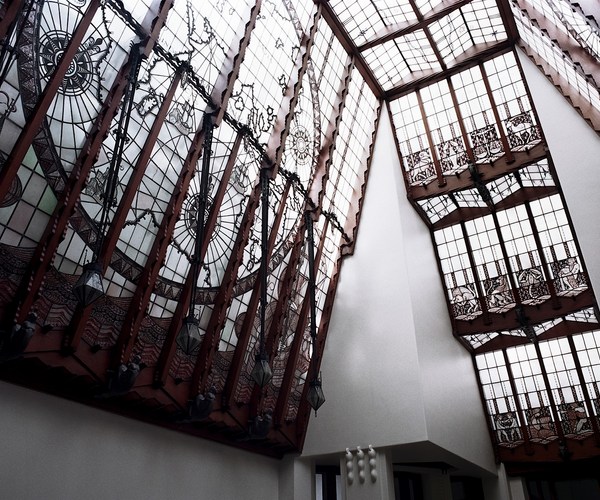 PPP Fun Fact Regarding the Amrath: Built in 1913, this once shipping house is now a luxury five star hotel and Dutch protected historical building designated in 1973. Commissioned by six shipping companies in Amsterdam, Het Scheepvaarthuis or “Shipping House” is located on the site from which the “Company of Far Lands” let by Cornelis Houtman set sail with a small fleet of ships for the first expedition to the East Indies in 1595.

After a bittersweet farewell at the Amrath, we walked over to the Radisson Blu Hotel located in the heart of everything. Upon check in, I noticed the modern and spacious open lobby design. After a tiny scare during the check in process (Front Desk couldn’t find our reservation), we settled into our new hotel room. The room proved to be clean and modern and comfortable. It was smaller than our previous room, but it was still very nice and I highly recommend this hotel! My tummy immediately notified my brain that I needed to eat a little something before I transitioned into museum mode, so we found a cute little pub near the hotel without any research. My smoked salmon sandwich tasted unexpectedly super delicious! BUT….for some strange reason, I still had Pancake Bakery on my mind, though. 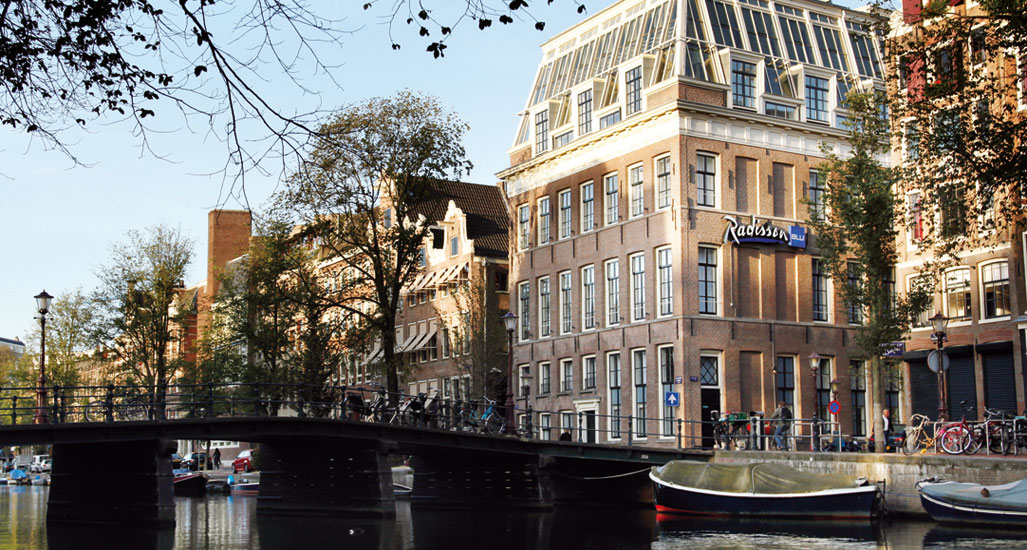 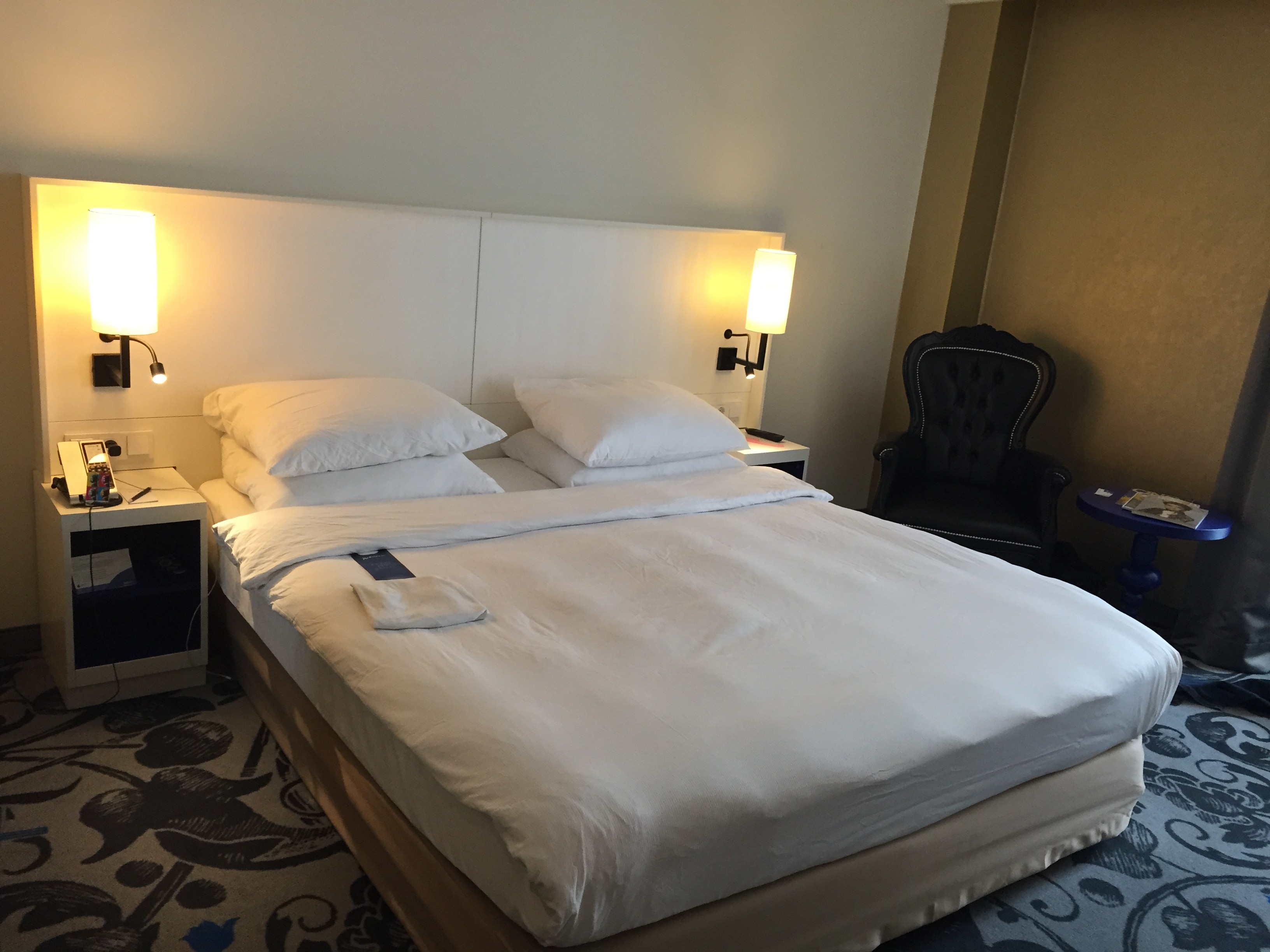 Guest room at the Radisson Blu 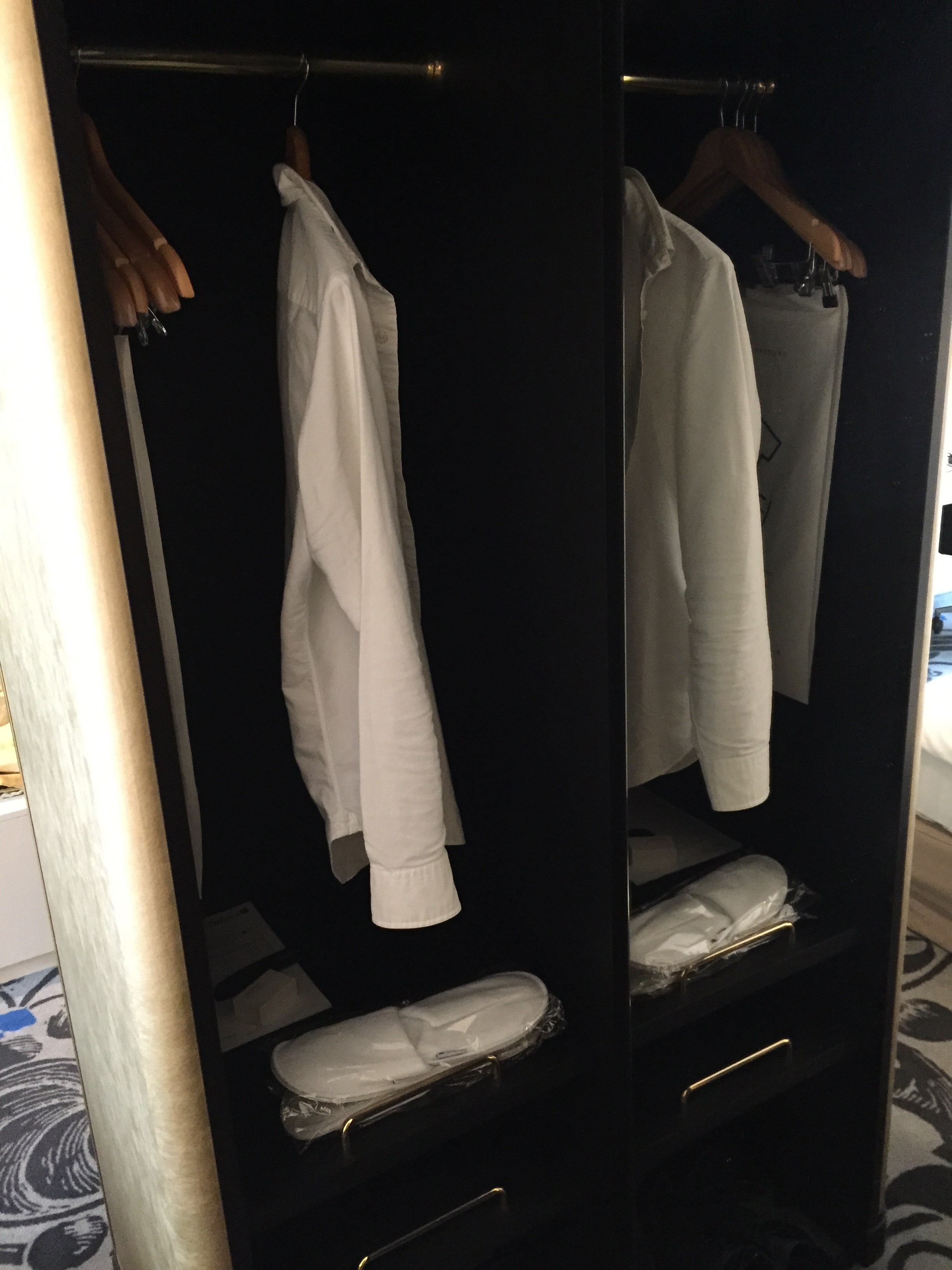 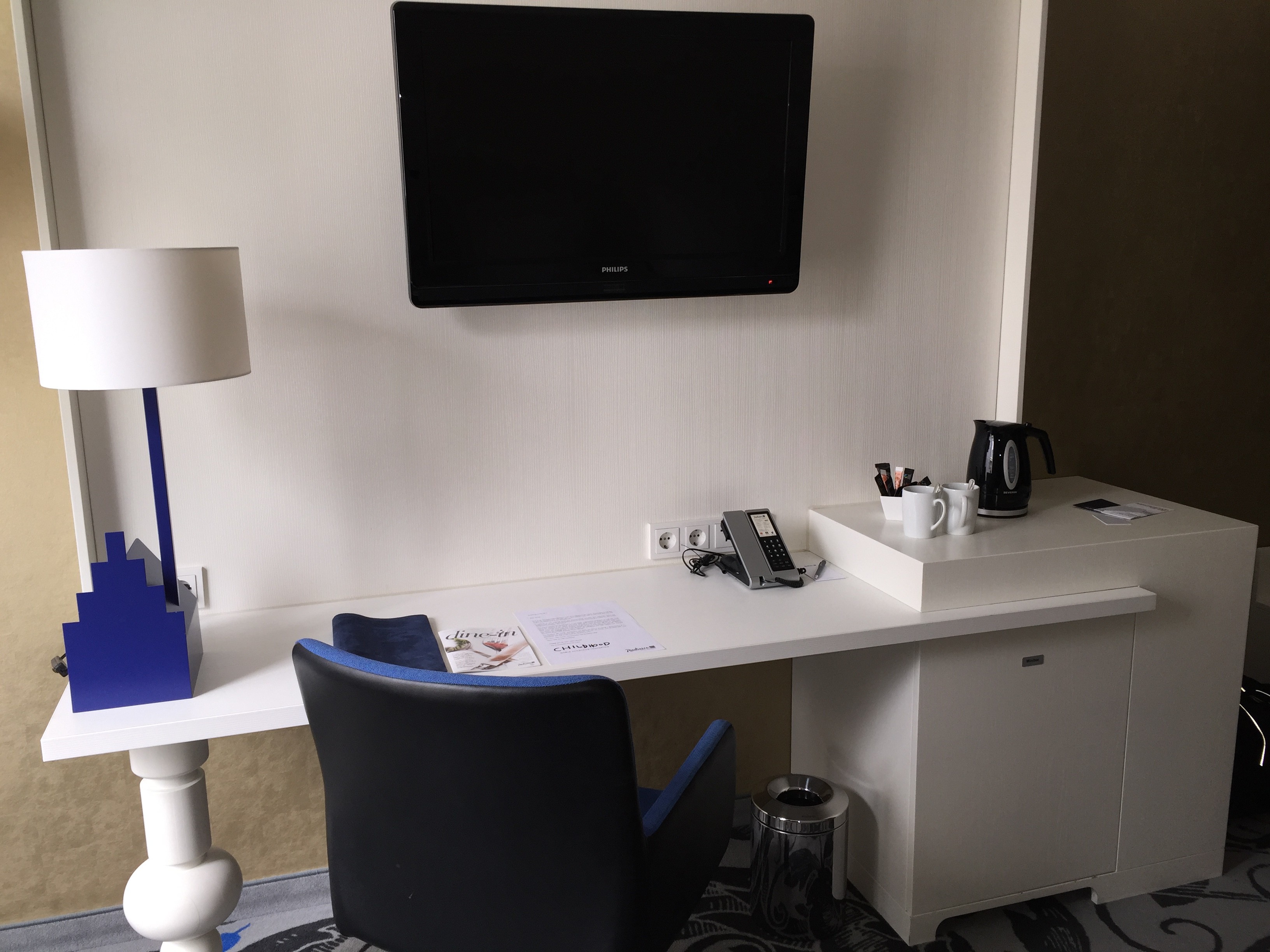 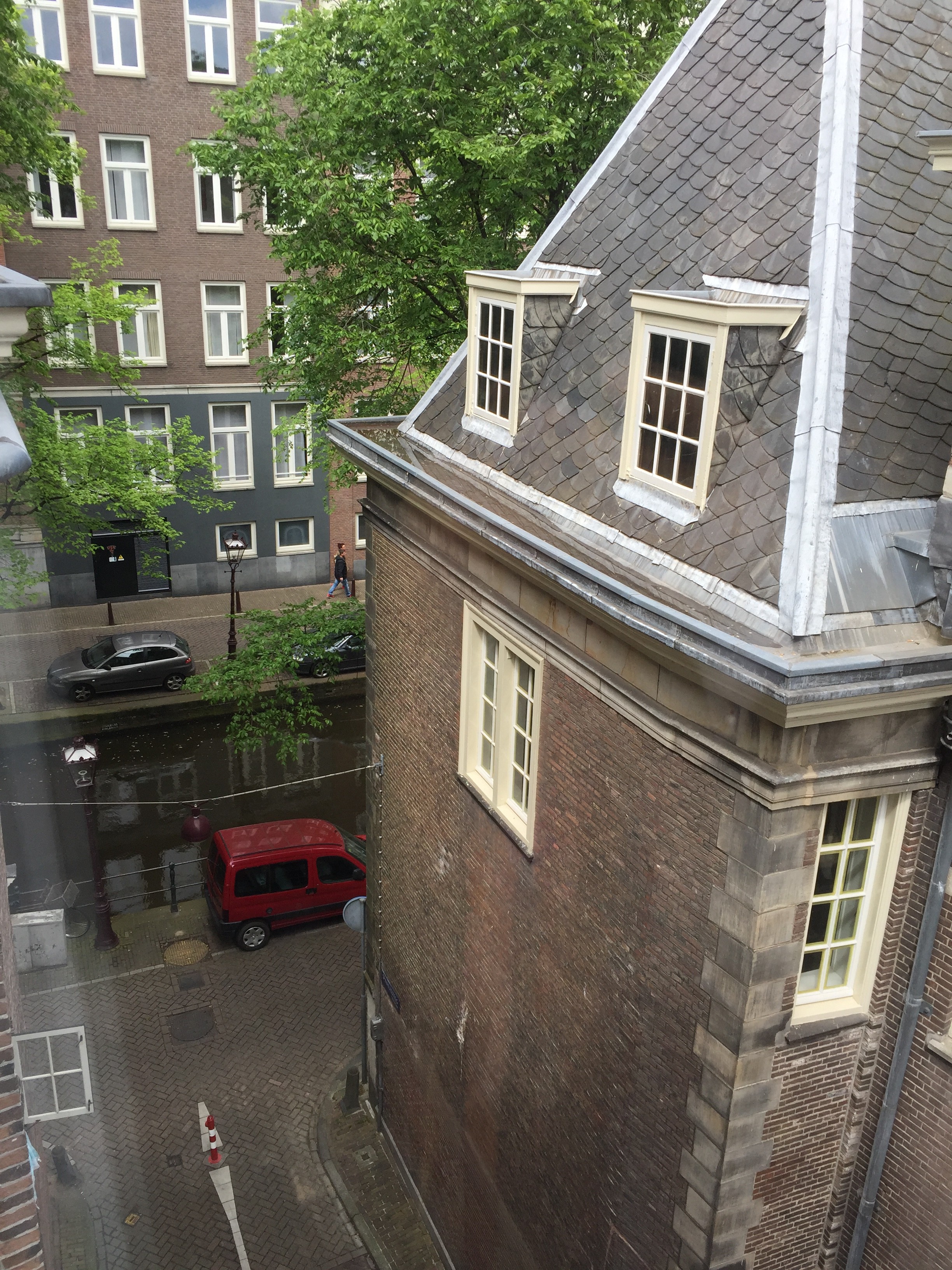 Canal view from our room 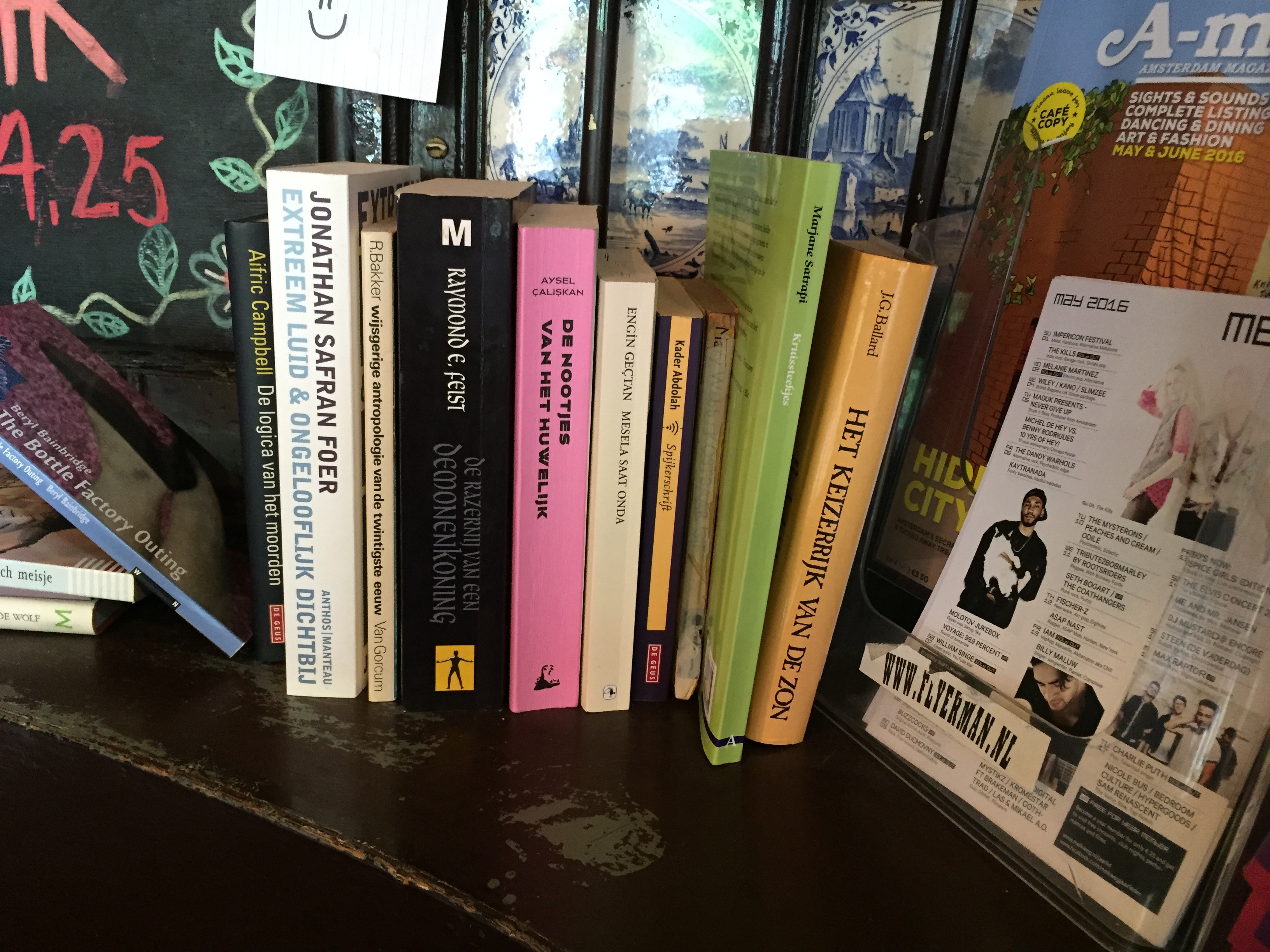 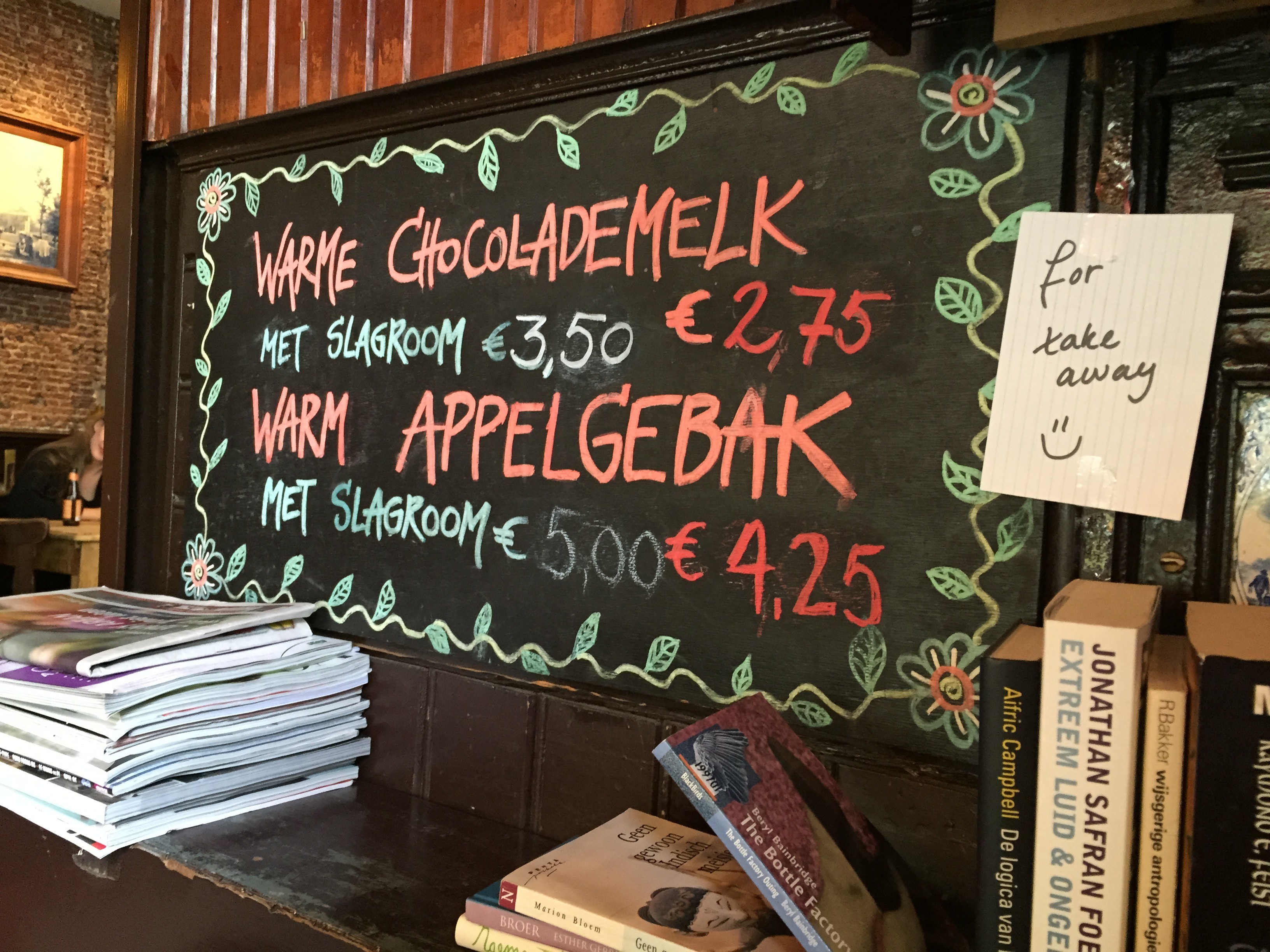 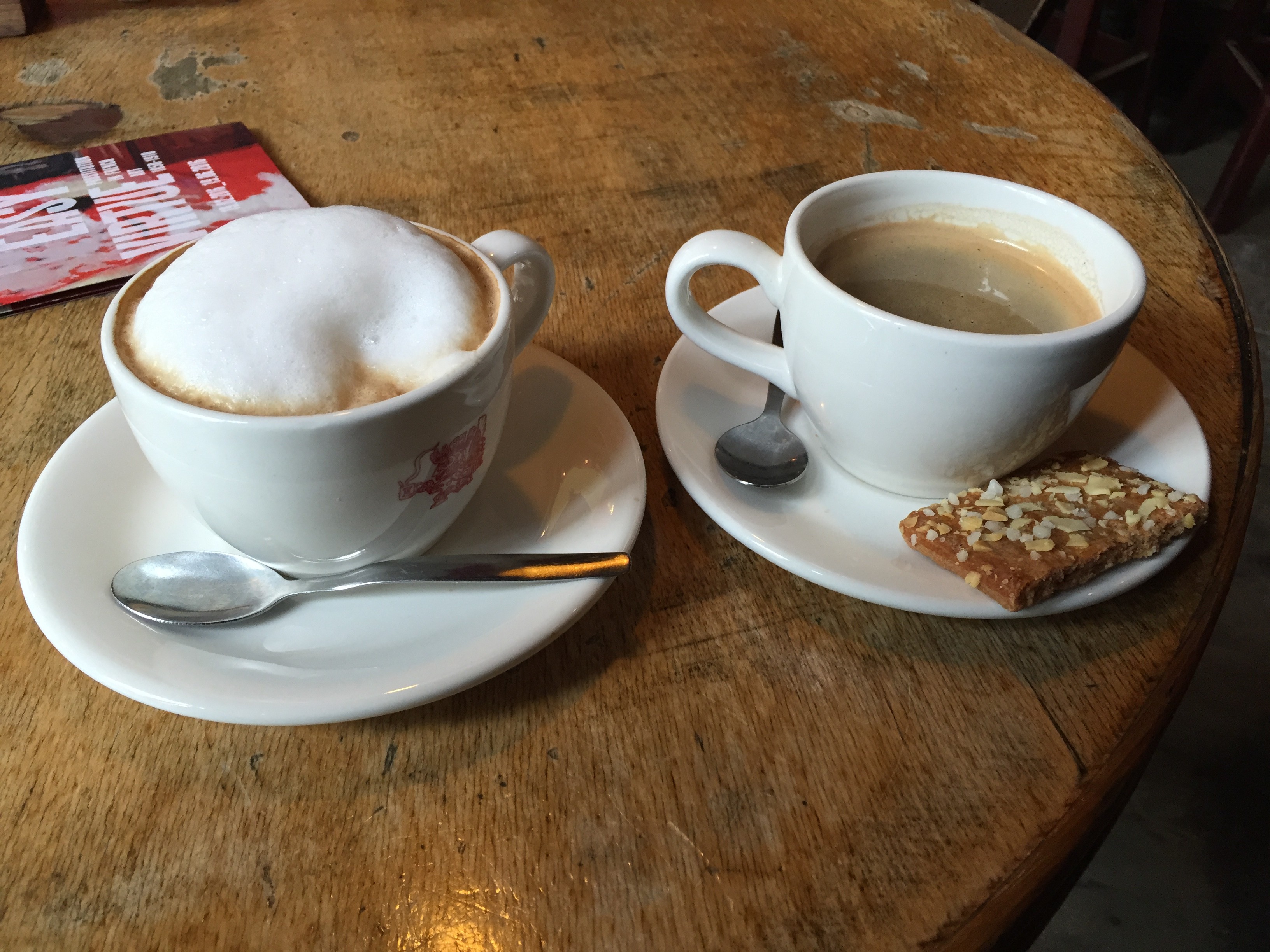 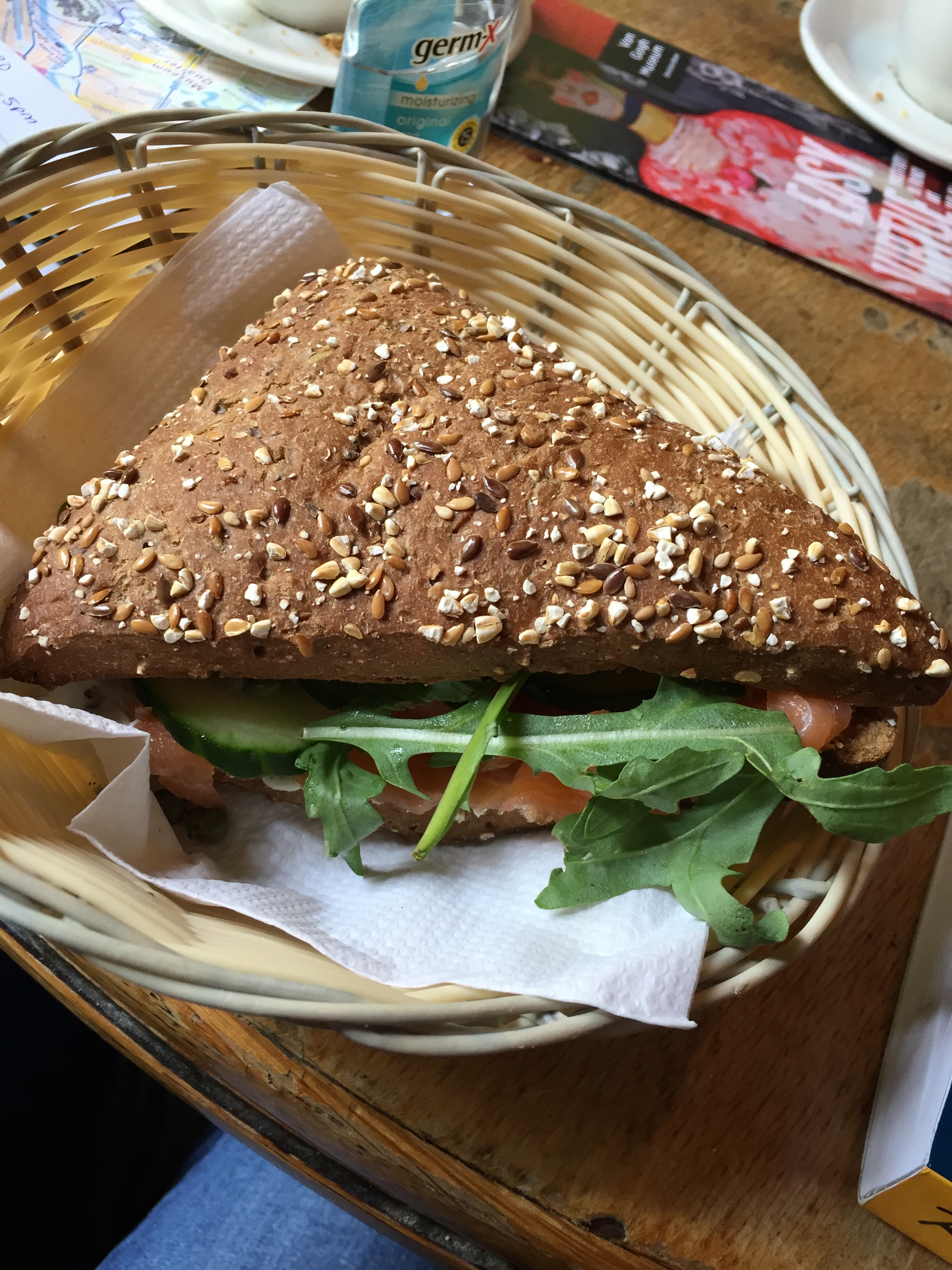 Food and coffee. Check. Next stop, Rijksmuseum. C’mon Rick Steves, let’s do this. The impressive building architecture, designed by Cuypers in the late 1970s, is a mixture of Renaissance and Gothic style, but according to the experts the Rijksmuseum leans more towards the Gothic style. Cuypers designed the Amsterdam Central Station as well and it has a similar style. 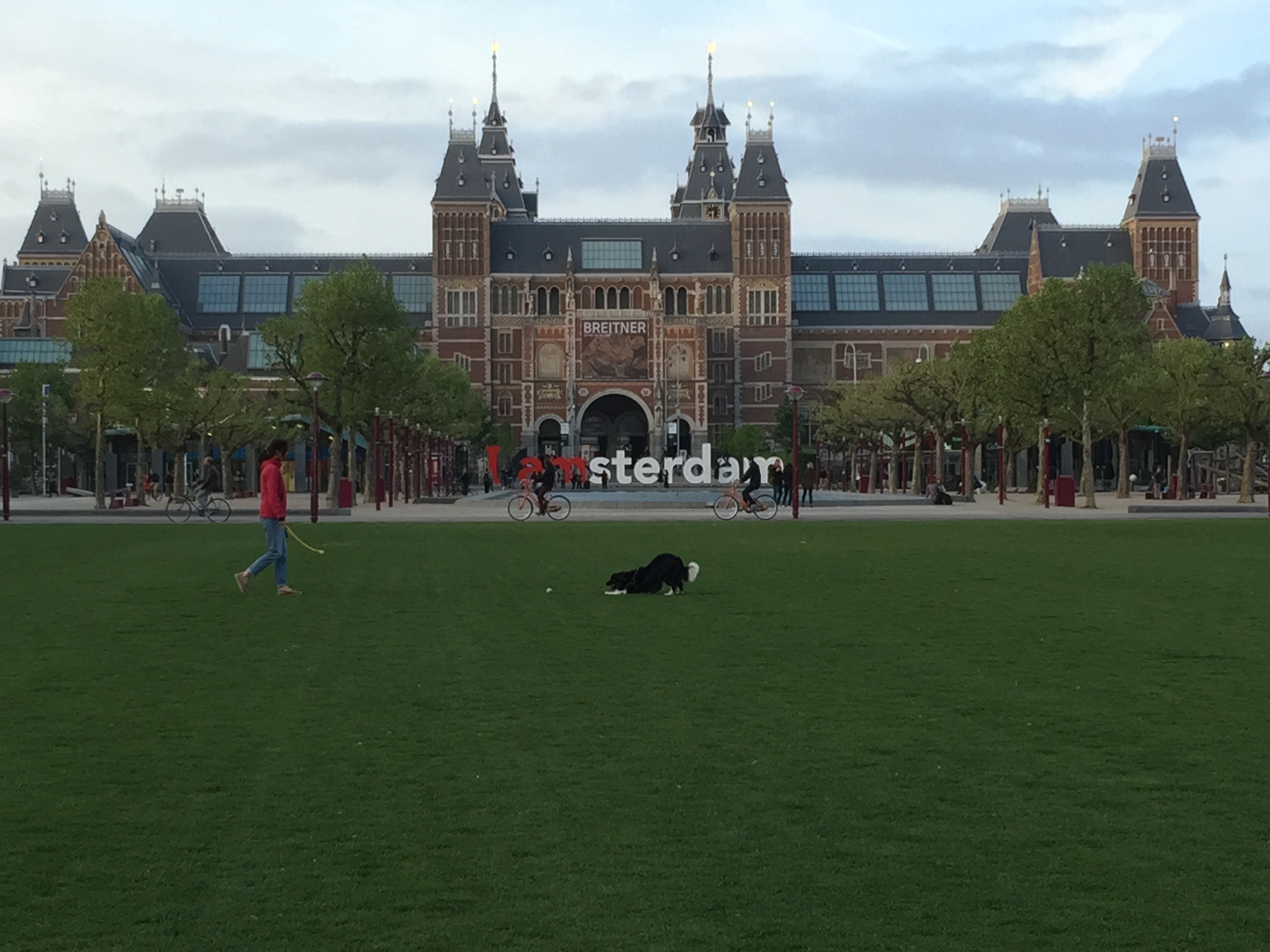 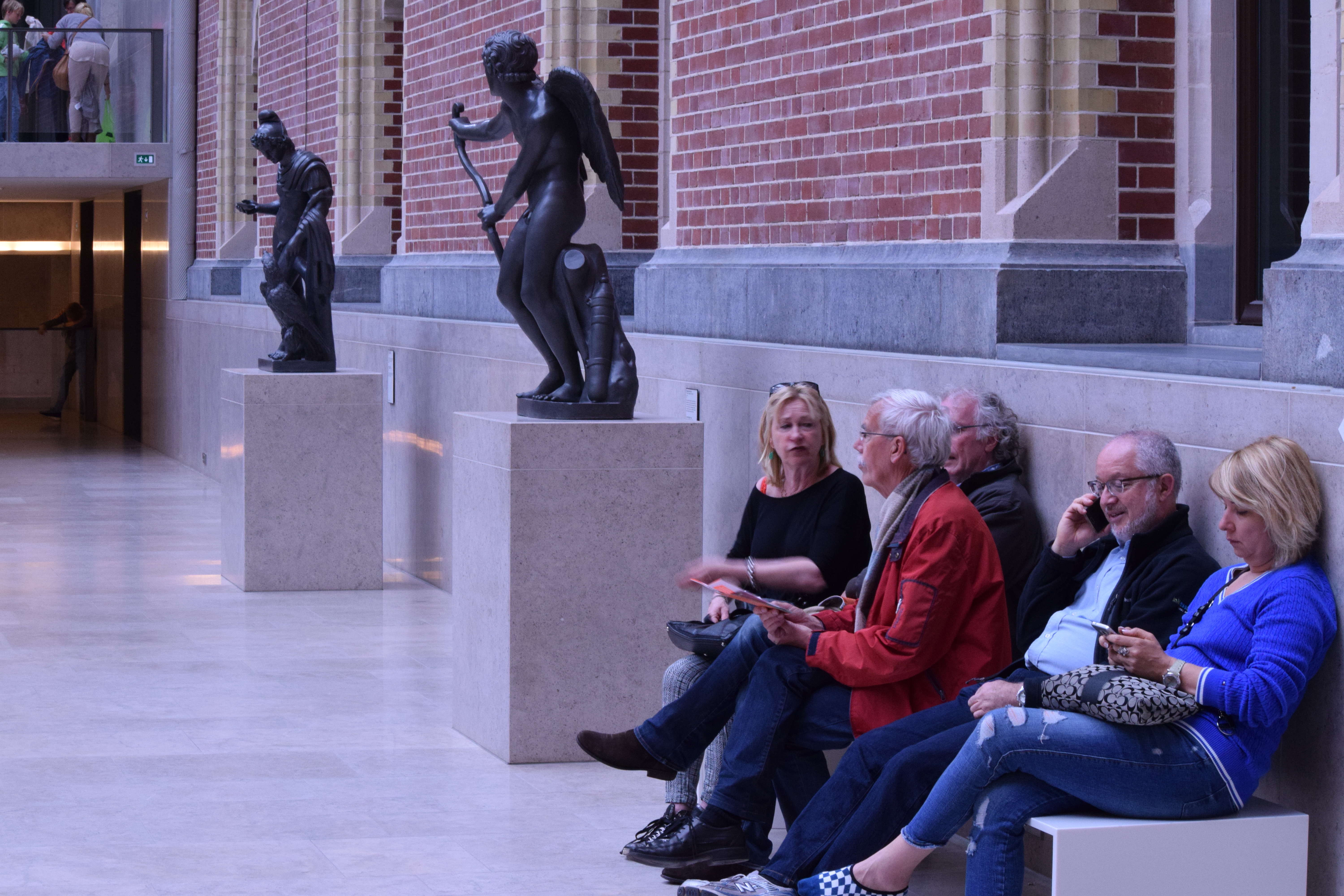 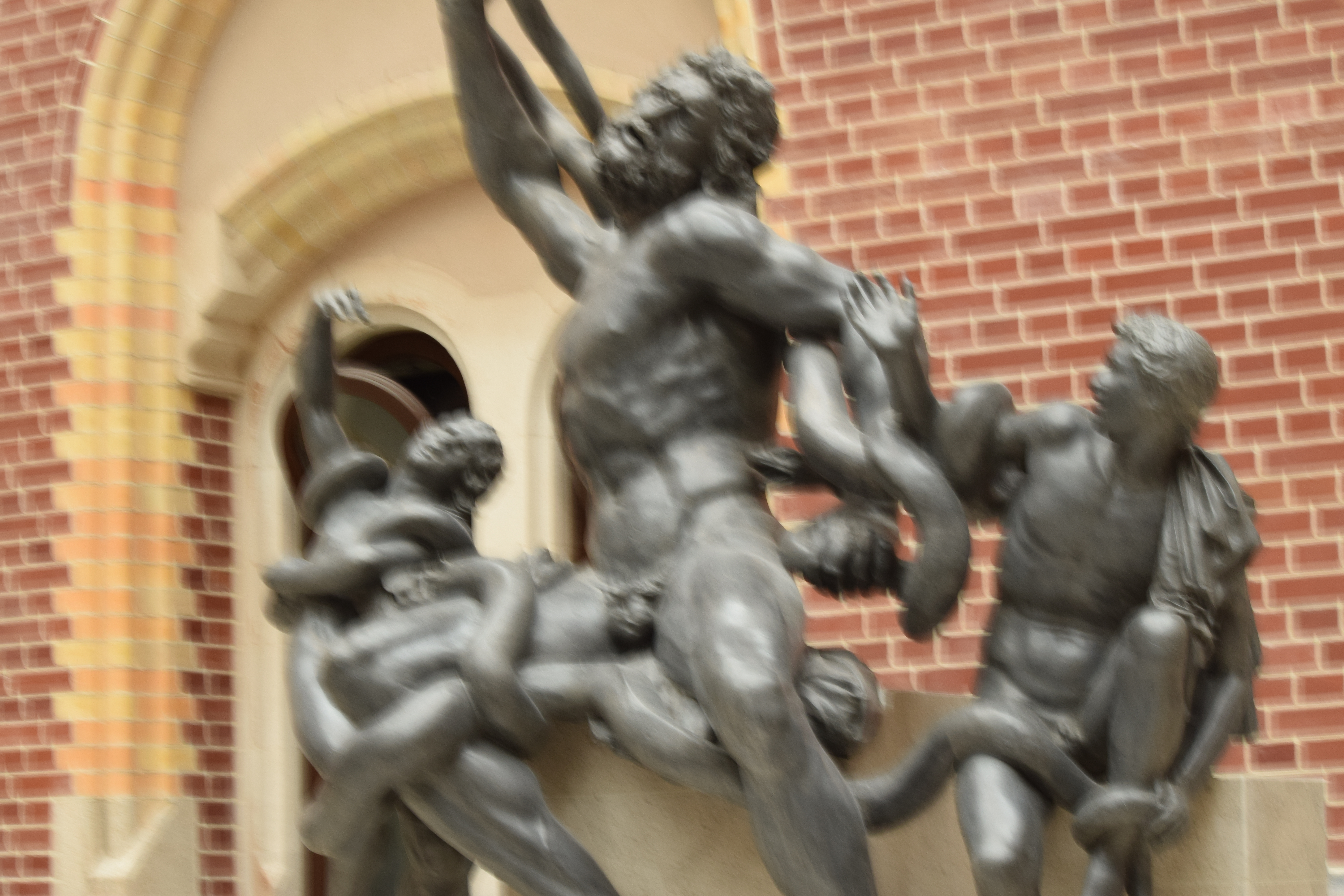 We didn’t have any issues getting into the museum, but once inside the space…holy people everywhere! As mentioned previously, we arrived in Amsterdam during a holiday weekend, therefore, the museum was very very crowded (as well as every other tourist destination in the city). We didn’t have to wait in line because I bought tickets in advance, but the museum was pretty much a mad house. Tourists listening to headsets, children running around, obnoxious people cutting in front of the paintings to take pictures with their cameras and phones.

In my opinion, visitors should plan for about 1 ½ hours of Rijksmuseum fun. It is not a very large museum so it will not take up most of your day. The admission ticket covered the entire museum. The Rijks showcased Dutch history starting from year 1200 to year 2000 with over 8,000 works on display. The highlight of the museum was the Dutch Golden Age (17th Century) permanent collection with masters like Vermeer, Steen, Hals, and Rembrandt. The Dutch Golden Age emerged after they won their independence from Spain and the trade and shipping business boomed, therefore, the arts flourished. These works included many Dutch dudes in black robes and hats hanging out in a merchant society background. My favorites were the Vermeer paintings as I felt they gave real view and a real sense of everyday life in Holland. Otherwise, I thought the museum was a bit sleepy. I didn’t get energized by the space or the paintings. With that being said, I happy we checked it out and checked it off the list! 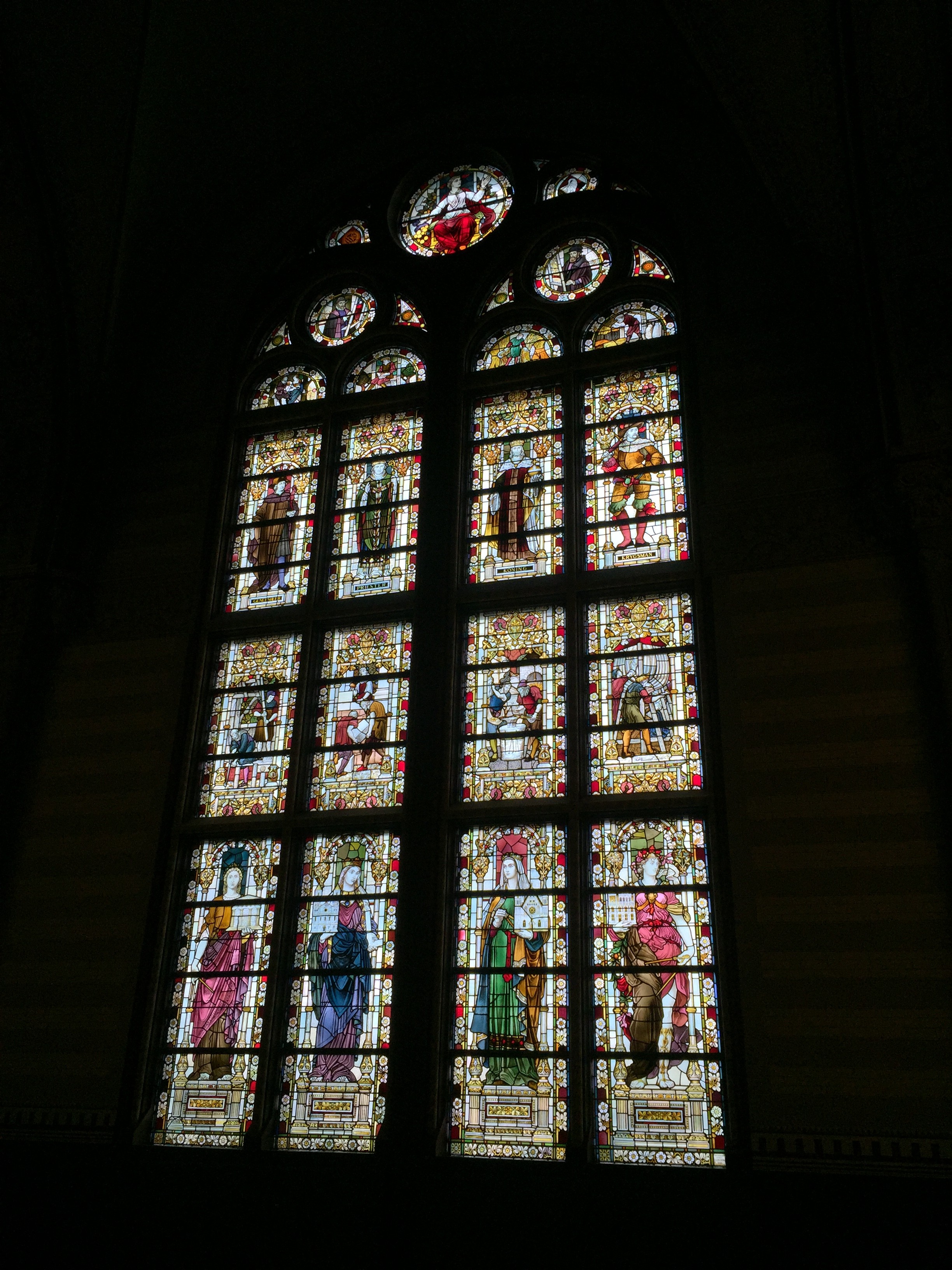 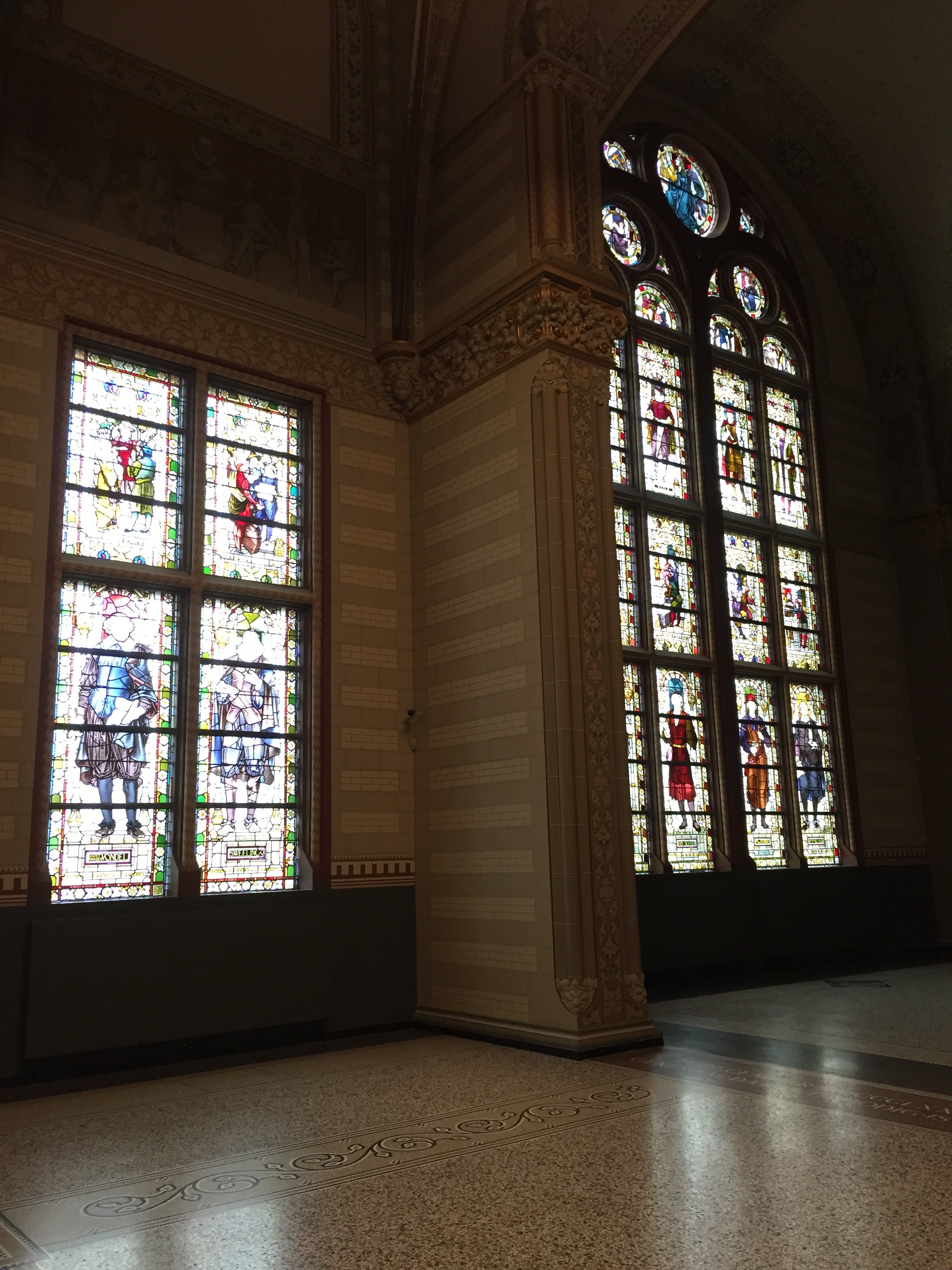 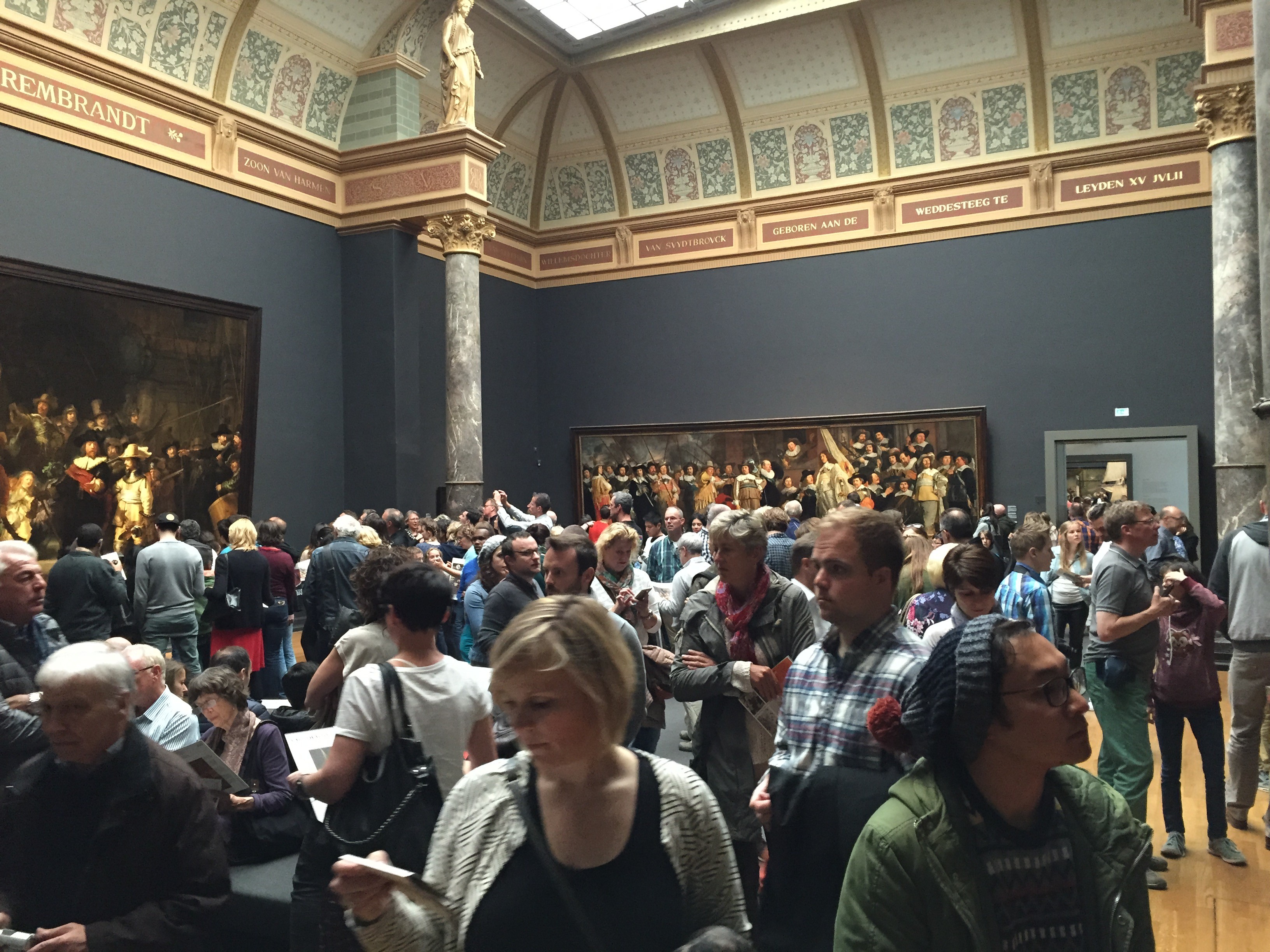 Popular day at the museum 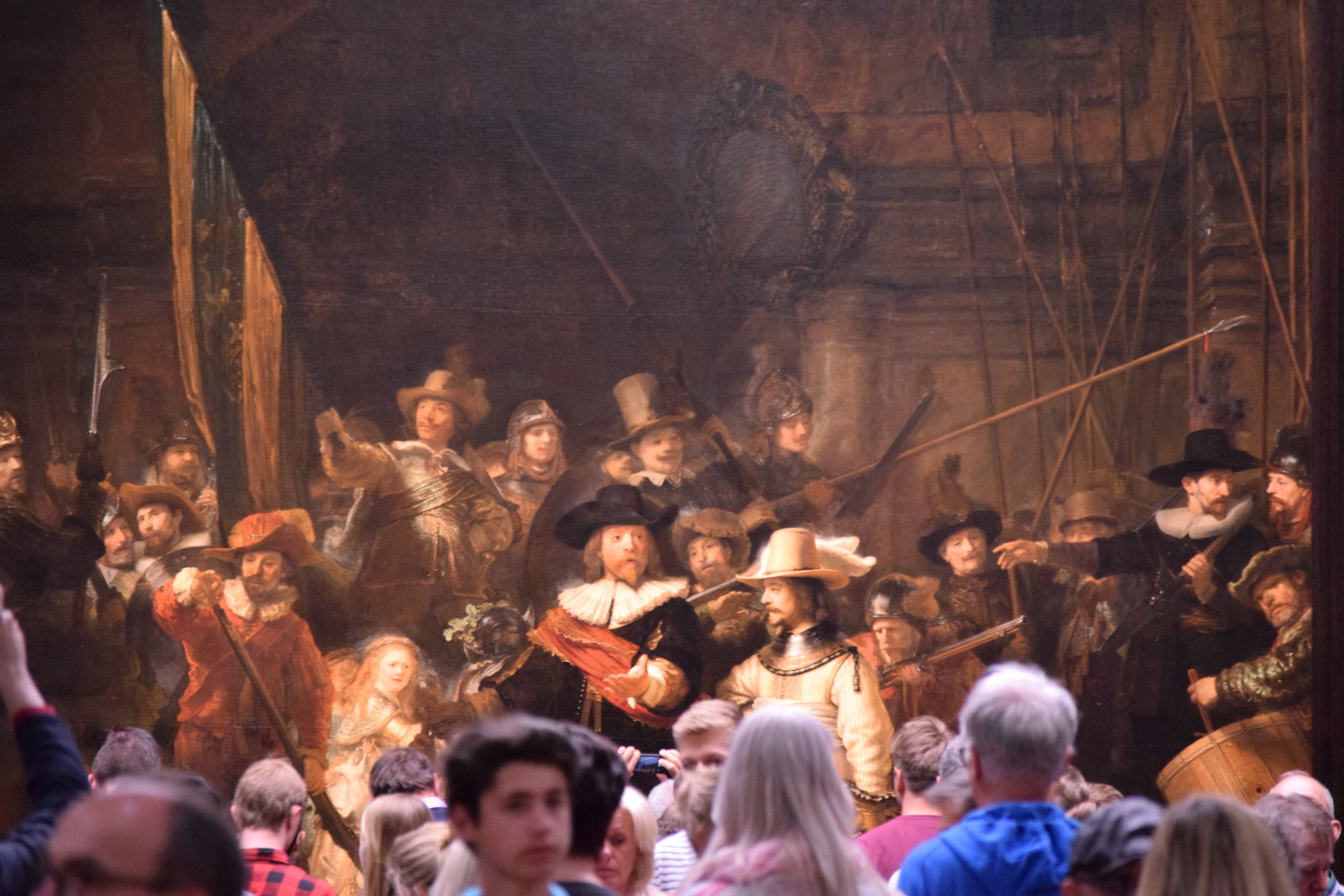 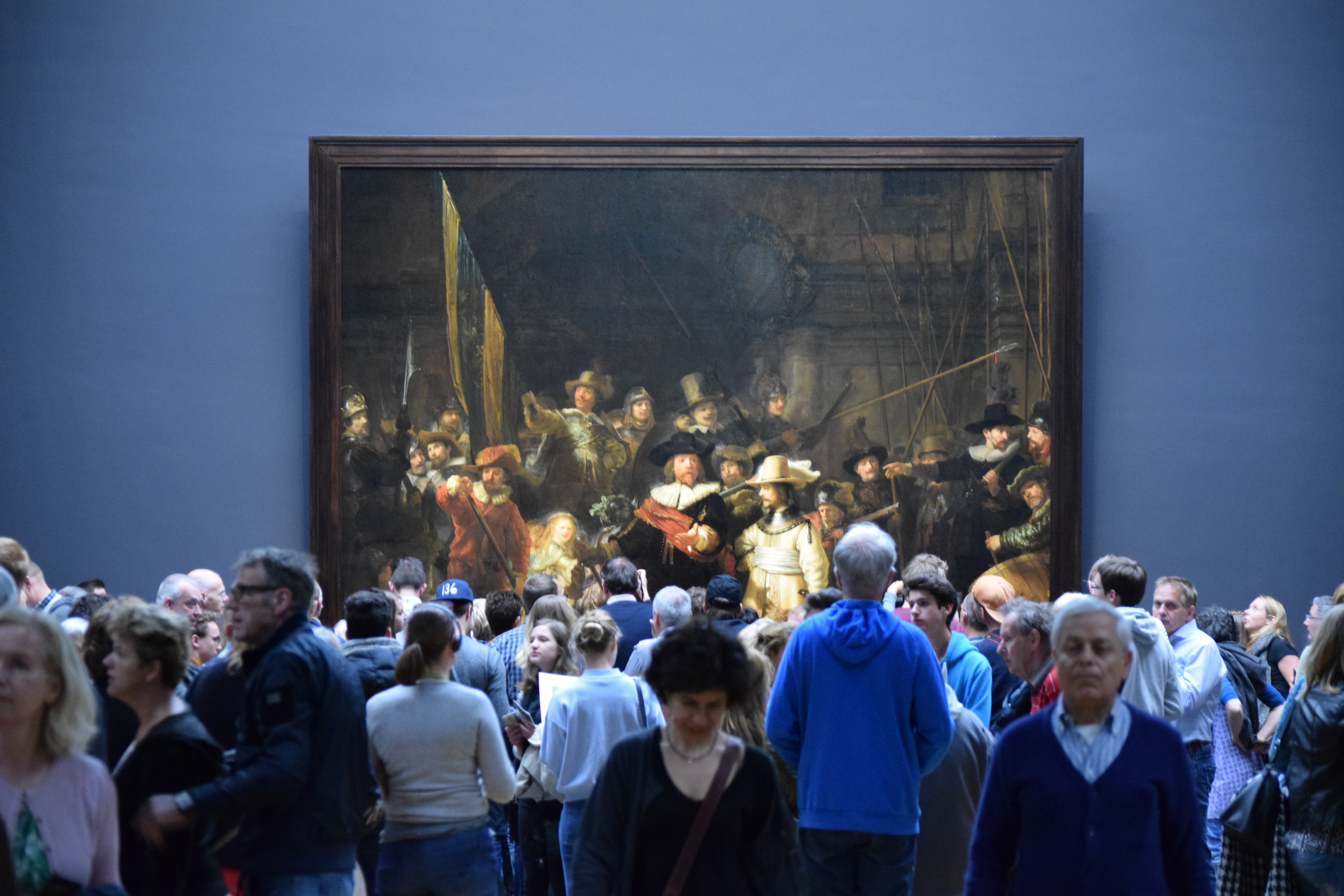 After the museum, we needed a walk and some fresh air! Naturally, I suggested going to Vondelpark (Central Park of Amsterdam) for some space in nature. After the walk, we walked back to the hotel for a little rest and coffee break. Our legs needed a little rest so we stopped by the hotel to relax for an hour before dinner.

Undoubtedly, one of the culinary highlights of Amsterdam is experiencing the Indonesian Rijsttafel or “rice table.” An Indonesian rice table feast consists of an array of flavorful side dishes and small plates accompanied by rice. Each unique dish is prepared in different ways as a showcase of the Indonesian cuisines from different regions of the former Dutch colony. Rijsttafel is not an Indonesian tradition, but rather a Dutch colonial tradition. During the colonial days, the Dutch created the rijsttafel to impress visitors with the exotic flavors and abundance of their colony in southeast Asia. Rijsttafel focuses on flavors, colors, degrees of spiciness and different textures of the food. Interestingly, rijsttafel is rarely found in Indonesia today as it is quite expensive and extravagant for restaurants to prepare so many ingredients and different dishes. For Indonesians, this type of feast is not sensible. Nonetheless, it still is a popular tradition in the Netherlands and some other countries in Europe. 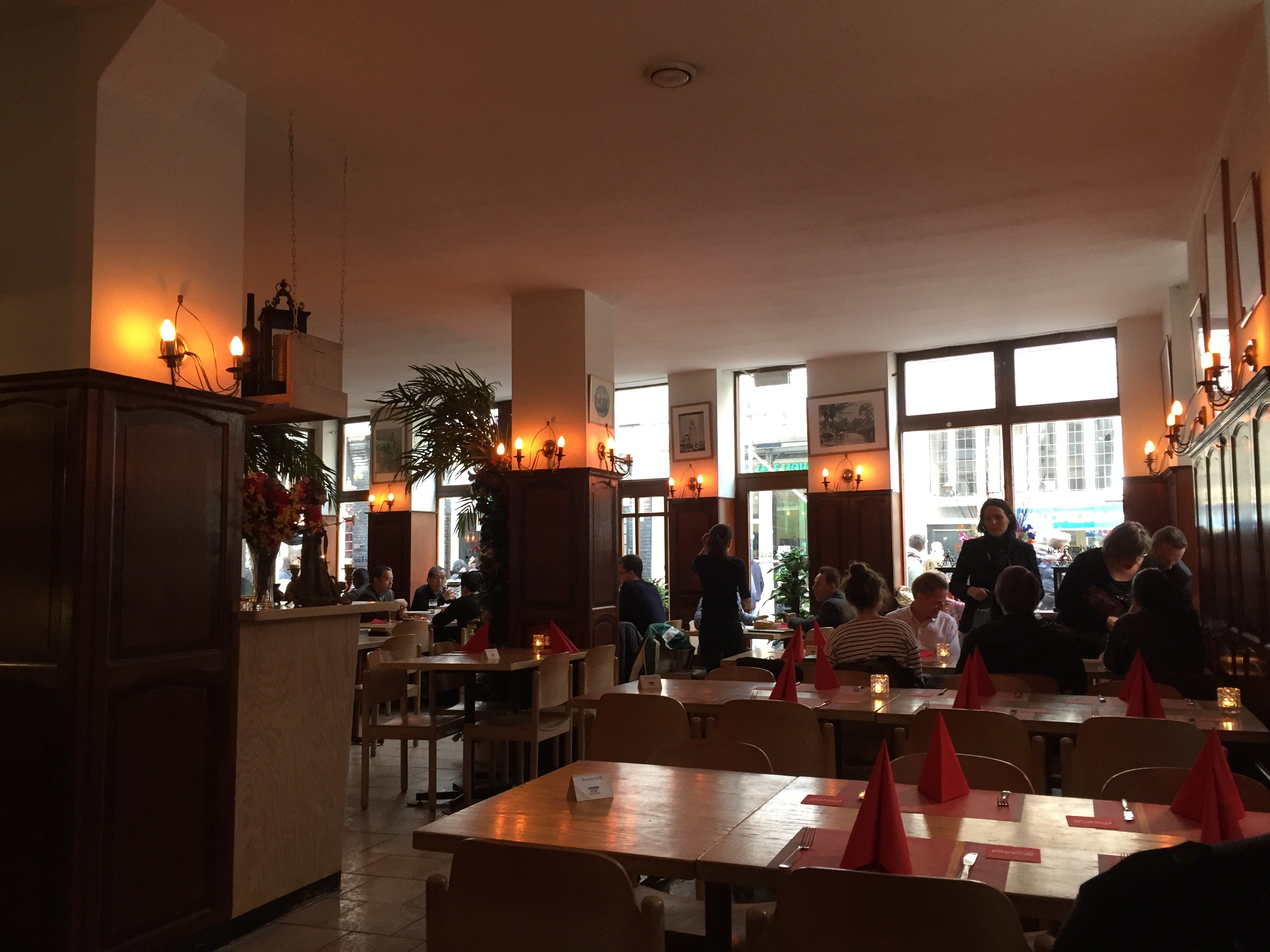 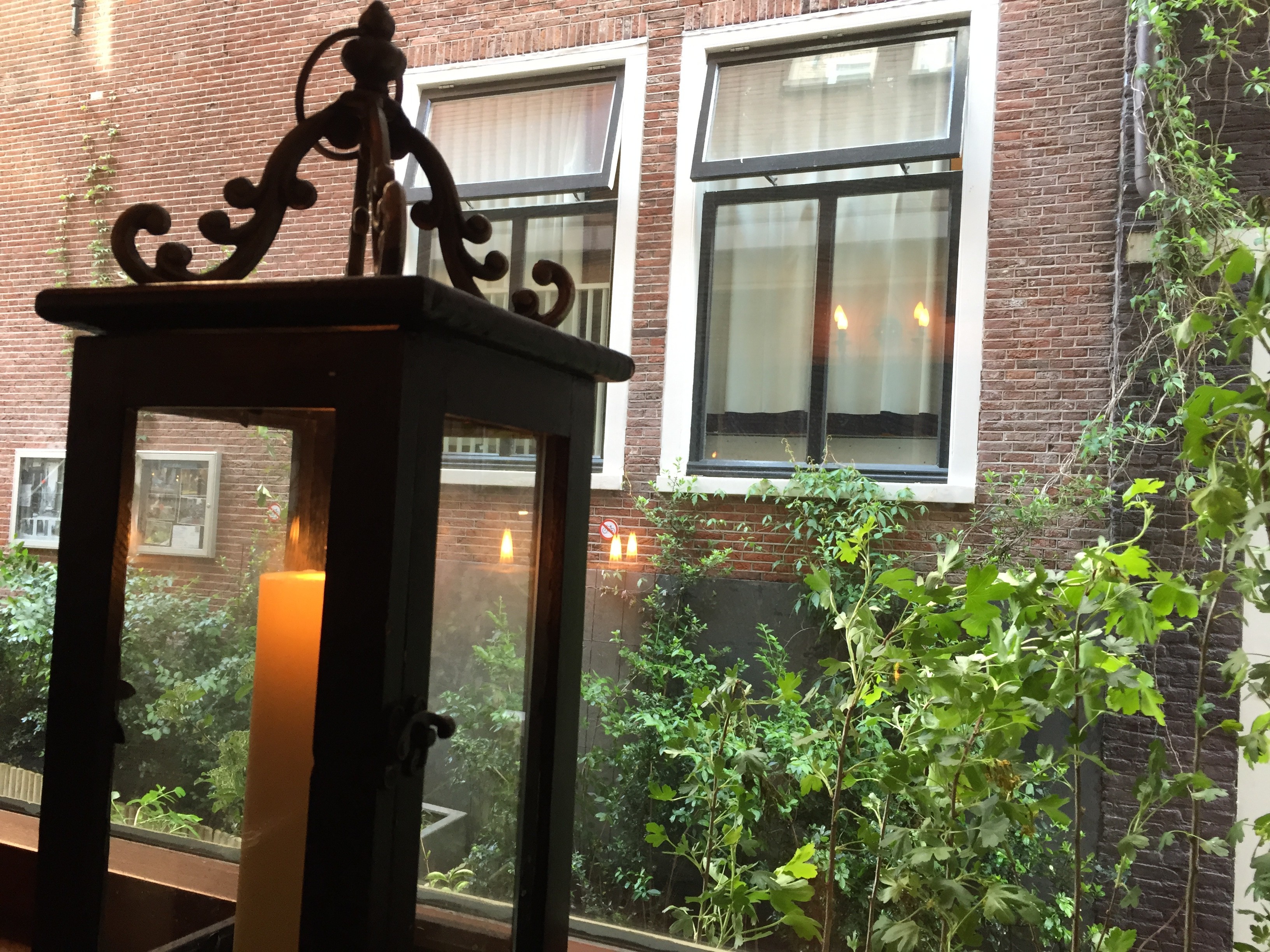 Table by the window 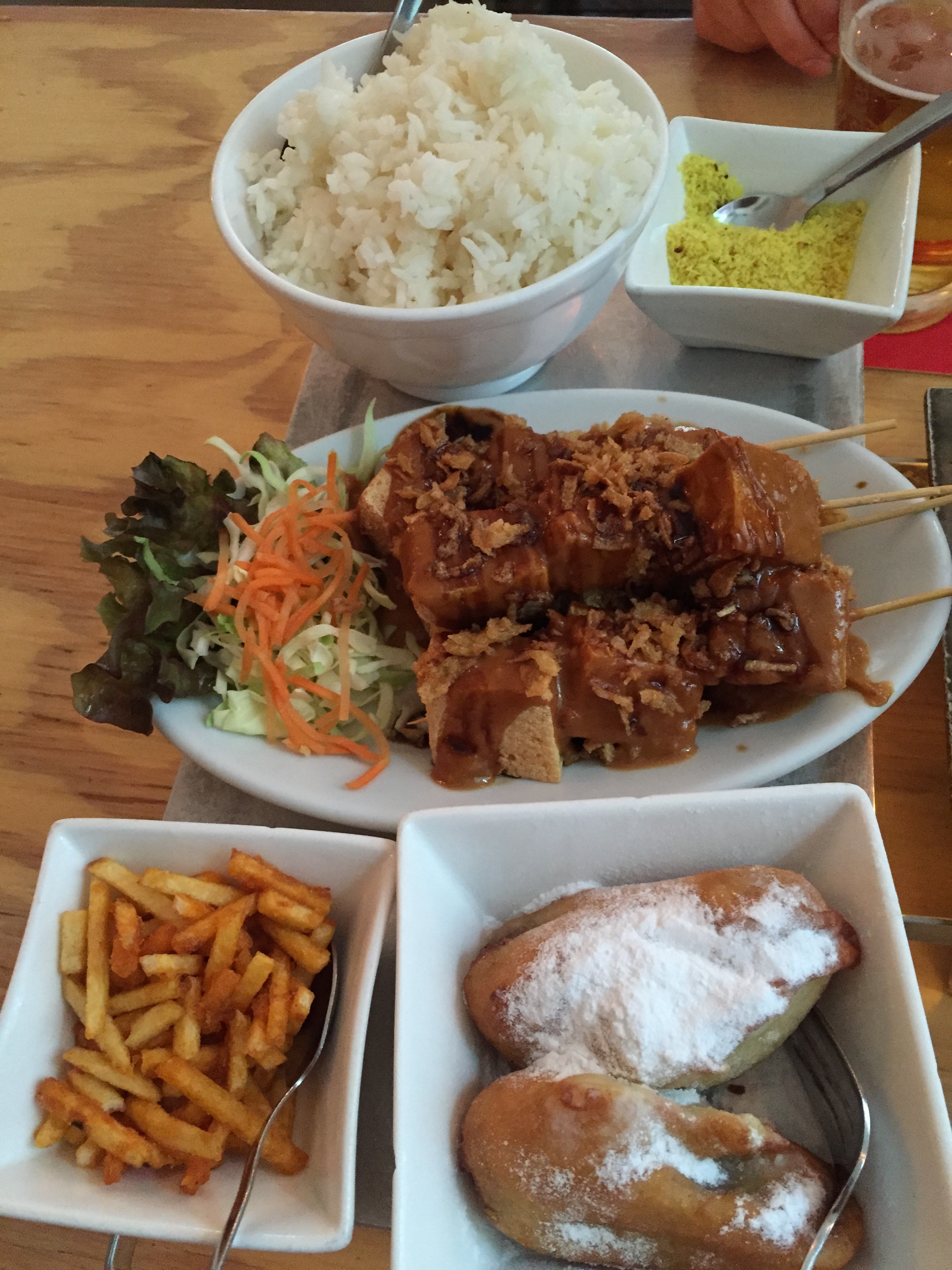 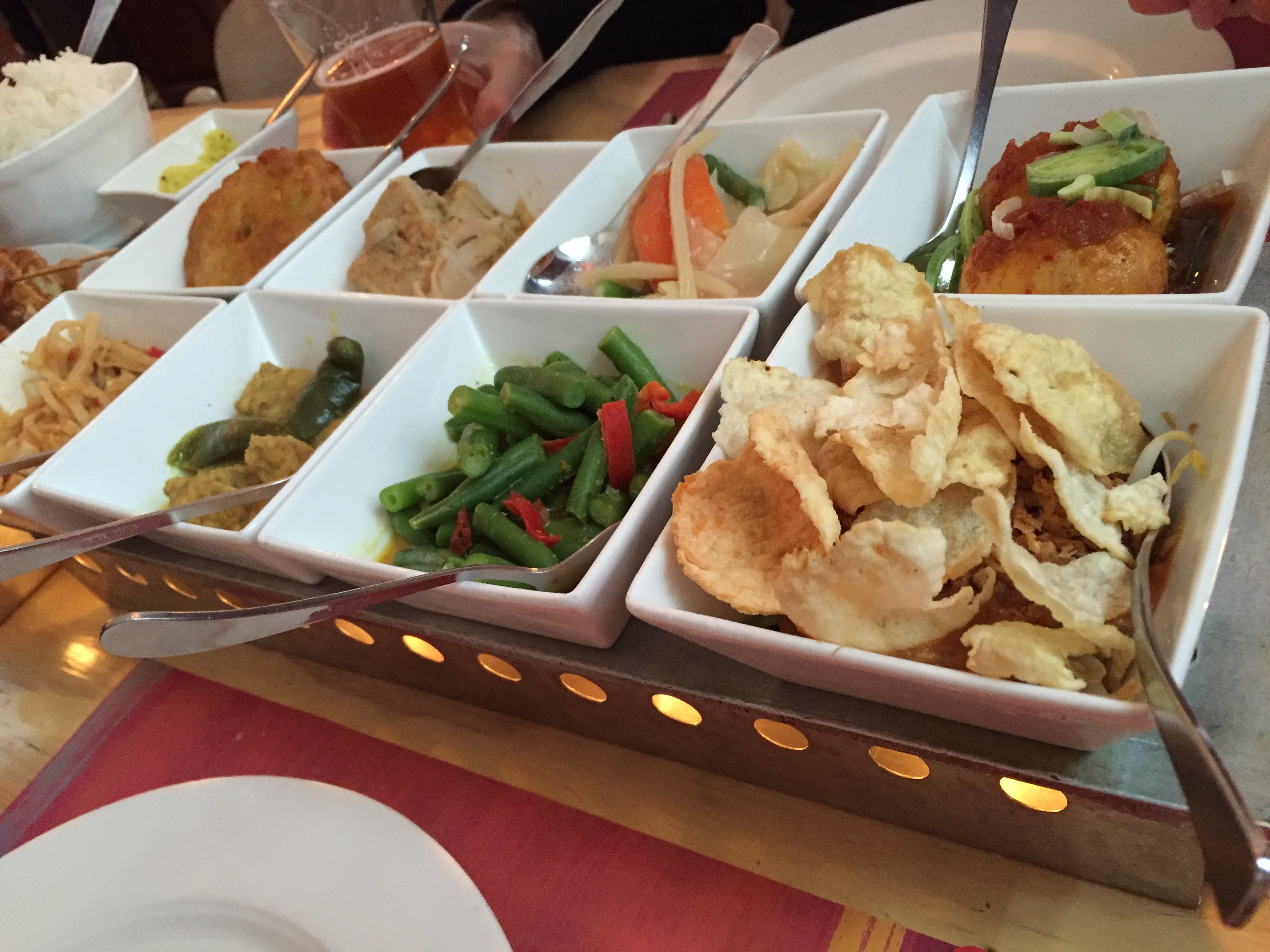 After our delicious and exotic dinner, we walked to meet our boat for an Amsterdam sunset canal cruise. The concierge desk at the hotel suggested we wait until later in the day for a sunset cruise in order to see and experience the beautiful illuminated canals, bridges, and buildings at night. The canal cruise was relaxing as we cruised around for about an hour. The audio tour on the canal boat tour was underwhelming as I crave as much historical information as possible. The canal boat company should consider hiring Rick Steves to narrate the canal cruise. He would be amazing!

After another full marathon travel day, it was time for bed!